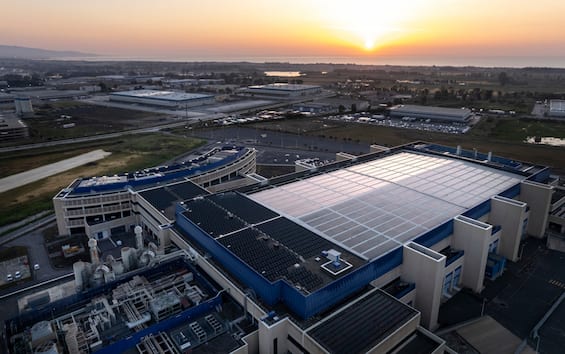 Transforming sun, wind and other renewable sources into electricity, thanks to technologically advanced projects, means guiding the path that will lead Europe and Italy to progressive energy independence. From the gigafactory of photovoltaic modules in Catania to the wind farm in the province of Campobasso, the Enel Group demonstrates with facts that sustainability is the present and the future of energy

Sun, wind, water, terrestrial heat. In short: renewable energy. We talk about it more and more often, especially since the awareness of the environmental effects of fossil fuels, and the consequences of an excessive dependence on their use also in terms of energy security, has made its way into public opinion. Therefore, nature is looked at as a source of electricity production to reduce the human impact on the ecosystem and, at the same time, to outline a perspective of development and relative satisfaction of energy needs that can gradually do without fossil fuels, until the appeal is cancelled. On the one hand, renewables – the name itself suggests – tend not to run out, because they are renewed spontaneously. On the other hand, they allow to reduce the amount of climate-changing emissions produced to generate energy. The objective is clear and there are those who are investing time and resources to achieve it, such as Enel Green Power (EGP), which within the Enel Group is responsible for developing and putting into operation renewable energy plants all over the world. Present on all continents, with a total capacity of around 54 GW generated by a mix of wind, solar, geothermal and hydroelectric power, Enel Green Power has developed and continues to develop cutting-edge projects in Italy that will form the backbone of the energy transition envisaged by international agreements and by the Pnrr. Safeguarding the environment, of course, but not only: by focusing on renewables, Italy is also moving towards reducing its dependence on other countries, ultimately building the only realistic and convenient path towards energy freedom.

The TANGO project: the rebirth of an Italian and European supply chain

Among EGP’s projects in Italy is TANGO, iTaliAN pv Giga factOry, an industrial-sized plant for the production of photovoltaic modules at Enel Green Power’s 3Sun solar panel factory in Catania. In line with the non-repayable subsidized loan agreement signed by EGP and the European Commission, an expansion of the Catania factory is planned which will lead it to increase its production capacity 15 times: from today’s 200 MW it will reach up to 3GW per year. The roadmap has already been set: the new factory should become fully operational by July 2024, after starting up with the first 400 MW of capacity in September 2023. 3Sun will thus become the largest European plant for the production of bifacial photovoltaic modules with gigawatt-scale performance. As Francesco Starace, Chief Executive Officer and General Manager of Enel explains, this is not a fundamental project only at a national level, but at a continental level: in terms of technological excellence, employment opportunities, but also for the crucial issue of the rebirth of a national and European supply chain. The worldwide demand for photovoltaic modules is in fact growing at a dizzying pace, but the geographical distribution of the supply chain, today excessively dependent on a single source in Asia, is its Achilles heel. The TANGO project was born precisely to remedy this vulnerability, which, as Starace underlines, “will bring 3,000 MW of production capacity a year back to Europe”. The factory, adds EGP CEO Salvatore Bernabei, “will contribute to the achievement of the EU’s increased ambitions which foresee 40% of energy consumption from renewable sources by 2030”. The total investment for the construction of the 3 GW factory amounts to approximately 600 million euros. EGP’s commitment will be complemented by funding from Brussels for almost 118 million euros. From a national point of view, and even more specifically with regard to the impact of work on the local fabric, it is an investment capable of increasing direct and indirect employment, creating about a thousand jobs by 2024.

3Sun’s production will include bifacial heterojunction (B-HJT) photovoltaic cells. They will be able to capture more sunlight than other models, because they are designed to receive light on both the front and back surfaces. The photovoltaic panels will also be able to incorporate a structure called “Tandem”, formed by two superimposed cells which will thus allow to capture more light compared to single cell structures. The 3 GW of panels produced each year by the factory will be able to generate up to approximately 5.5 TWh of electricity per year. Coming from renewable sources, they will avoid the emission of almost 25 million tons of CO2 in their first ten years of activity. The production generated by the panels will also have the potential to avoid purchasing up to nearly 1.2 billion cubic meters of gas per year. 3Sun is also a candidate to become a model of circular economy. By focusing on research and collaboration with research centers and leading companies in the sector, the degree of circularity of the entire site will increase through increasingly effective recycling processes for the management of photovoltaic modules. Added to these are the use of automated procedures for low-waste production processes and the development of artificial intelligence algorithms aimed at minimizing waste.

EGP’s commitment involves the whole country. Moving north, in the municipality of Trino (Vercelli), construction has begun on a photovoltaic plant which will be built on an area of ​​about 130 hectares, adjacent to the former Galileo Ferraris power plant. It is one of the largest solar plants in Northern Italy: it will consist of almost 160,000 modules, will have a power of 86 MW and will be coupled to a 25 MW electrochemical storage, capable of contributing to the adequacy of the electrical system and provide ancillary services to the network. Once fully operational, the plant will produce approximately 130 GWh each year. Translated: around 56,000 tonnes of C02 emissions will be avoided and 29 million cubic meters of gas will be saved. For this project, explains the president of the Province of Vercelli Davide Gilardino, the territory will also be affected by the redevelopment of the socio-cultural heritage. In fact, architectural and functional recovery interventions are planned for some buildings in Borgo Leri Cavour present in the area immediately adjacent to the photovoltaic system, as well as a recovery intervention for a section of the historic layout of the road connecting Borgo Leri Cavour and Cascina Colombara.

Another EGP project is already in service: the wind farm between the municipalities of Castelmauro and Roccavivara, in the province of Campobasso. Here, seven wind turbines of 4.2 MW each will produce around 70 GWh of energy from renewable sources each year, avoiding the emission of around 30,000 tonnes of CO2 per year and the use of 15 million cubic meters of gas. contributing once again to the Italian path towards energy independence and decarbonisation.