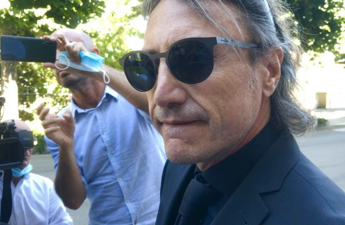 (from correspondent Elvira Terranova) – Functioning microphones, a new projector, a video wall on which to project images and technical assistance “necessary for the proper functioning of the hearing”. This time, at least on paper, in the trial of Grillo junior and his three friends accused of gang rape, everything should go smoothly. After the hiccup of the last hearing, on October 19, when the judges of the small Court of Tempio Pausania, in Sardinia, were forced to postpone everything until tomorrow, because there were no microphones and instead of a screen there were A4 glued as best as possible on the wall with scotch tape, new microphones have arrived and also a screen where you can project videos. Adequate technical assistance was also ensured by the President of the Court Giuseppe Magliulo. The witnesses who were called for the last hearing, but who were forced to return home after the postponement ‘for technical reasons’, will thus be heard tomorrow.


For tomorrow, starting at noon, the two owners, husband and wife, of the B&B in Palau are thus expected, who in July 2019 hosted for a few weeks the 19-year-old Italian-Norwegian student who denounced the four young defendants and the younger sister. They told the carabinieri who questioned them in the days following the complaint that the young woman was serene the day after the alleged gang rape, “perhaps a little taciturn as always”. While then, later interviewed by Corriere della Sera and by Repubblica, Daniele Ambrosiani said that the young woman seemed upset. Ambrosiani and his partner, the day after the alleged sexual assault, saw the two girls returning to the B&B around 3 pm: “They got out of the taxi and my partner noticed that they had the same clothes they were wearing the night before, when they come out”. The fact that they had spent the night outside seemed strange to the two, because the young girls “had been here for several days and they weren’t girls who went out every night, if I remember correctly they had never really ever gone out in the evening, much less they were out sleeping.” What happened that night, Ambrosiani cannot know.

But her impression is that from that moment on the two girls were no longer the same: “They were silent and thoughtful, especially the Italian-Swedish girl. We imagined that they had probably quarreled with each other”. But then, one day after August 15th, “two plainclothes carabinieri arrived to ask us questions and we understood”. At the B & B in Palau, the 19-year-old was hosted together with her friend. She, too, the latter would have been the victim of violence from her group of friends. Two o’clock, the night before, they had been at the Billionaire disco where they had met Ciro Grillo, son of the founder of the Five Stars and three Genoese friends, Francesco Corsiglia, Edoardo Capitta and Vittorio Lauria.

The owner of the Ambrosiani B&B then recounted that Silvia, the following day, would ask him if he had a bicycle to go to Palau, the closest municipality to the locality where the B&B is located. “She seemed nervous to me, she had the manners and air of someone in a hurry to do something, so much so that I told her: if you want, I’ll take you in the car. She told me no, she preferred to go alone. I found out only now that she wanted to go to the pharmacy to take the morning-after pill. At first she seemed a little agitated, in fact. Nervous”.

In the last hearing there was no lack of clashes in the courtroom, in Tempio Pausania, between the defense lawyers and the Court on the other. Precisely because of technological shortcomings. So much so that the President of the Court Marco Contu after a brief suspension of the hearing withdrew to the council chamber and, after a consultation with the president of the Court of Tempio Pausania Giuseppe Magliulo, postponed the trial until tomorrow also canceling the appointment for the November 2nd.

Also tomorrow morning, in addition to Maika Pasqui and Daniele Ambrosiani, the two owners of the B&B, there will also be Francesca Brero and Marco Grusovin, the two kitesurf instructors from Porto Pollo where the Italian-Norwegian student took lessons. Who will have to tell the state of mind of the young girl in the aftermath of the alleged rape in the courtroom. And again, the presence of the gynecologist Marta Castiglioni, the psychologist Laila Micci and the coroner Vera Gloria Merelli is expected. They are the three doctors who 9 days after the alleged sexual assault visited Silvia at the Mangiagalli Clinic in Milan. And they were the ones who sent everything to the investigators “recognizing the details of a crime that can be prosecuted ex officio”, wrote the three doctors. The report shows that the young woman had pressure bruises, attributable to her to say to the constraint and sexual violence. As well as the right forearm, right leg and left leg.

But what had happened on the night between 16 and 17 July 2019 in Beppe Grillo’s villa on the Costa Smeralda, used by his then twenty-year-old son Ciro and his friends? In the complaint filed on 26 July 2019 at the Carabinieri station in Milan Porta Garibaldi, the young woman recounted in every detail what would have happened that night at the end of an evening at the Billionaire in Porto Cervo. The girl was on holiday and on the evening of July 16th she decided to go to the club with a friend, leaving her younger sister in the B & B. There she, with a friend, met the four young men from Genoa, including Grillo’s son, and they began to make friends. Upon returning to S. and R’s B&B, they would not find an ‘available taxi’. “For this reason the four boys offered us to stop and sleep at their house, where we all went by taxi together”, said the young woman. “We chatted a bit – she still reads in the complaint – the others smoked and drank, I didn’t drink or smoke”.

The friend would have started cooking pasta and Francesco Corsiglia, according to the complaint, would have asked the Italian-Norwegian girl to accompany him to a bedroom to get some blankets. Here the girl, to tell her about her, would have suffered her first heavy advances: “She first kissed me on the mouth, I stopped him saying I didn’t want to”. Hence other advances and the demand for oral sex but the girl would have wriggled free and she would have returned to the others. After the spaghetti dinner, Vittorio Lauria allegedly gave the girl “shorts and a t-shirt to sleep in”. “But once in bed, her problems would begin for the girl. In the reconstruction of the Italian-Norwegian match, the first to slip under her sheets would again be Corsiglia”. And here begins the story of the alleged rape. Not only on the bed but also in the shower.

“He pushed me into the shower – the girl told the Carabinieri – he turned on the water and pushed me against the wall… I told him twice to stop, that he was an animal and an asshole, but he continued harder pulling my hair”. After the alleged gang rape suffered in Beppe Grillo’s villa on the Costa Smeralda, the young student, who now lives abroad, would have woken up her friend, who was sleeping on the sofa, to tell her she had been raped, but the latter she would have “shrugged” because she was half asleep. “I sat on the ground next to her – she had the young woman recorded in the minutes – I woke her up, initially I couldn’t speak well, she asked me what was wrong and I told her ‘they raped me’. R. initially did not understand and I repeated it to her, then I asked her if we could go home. R. sat down on the sofa and shrugged at me: I repeated to go away because I was sick and they had raped me, but she didn’t say anything. I took it and I got her off the couch, told her to get dressed to go away.”

But Vittorio Lauria would have convinced them to stay, according to the reconstruction of the prosecutor led by Gregorio Capasso. “He asked us to wait some time because having drunk alcohol Francesco could not drive and had to rest”. But at that point the nightmare would not end, according to the girl’s story. In the meantime, it’s nine in the morning. “On the table is a bottle of vodka that smells ‘strange’ and which according to the boys is ‘impossible to finish'”. Vittorio Lauria at that point allegedly stood up and directed the liqueur towards the girl: ‘He grabbed my head tightly, with one hand he held my neck from behind and with the other he pierced me to drink it all. head after drinking, I don’t remember exactly.’ Tomorrow will be a crucial hearing, therefore, in some ways decisive.Prosecutor Capasso will have to decide whether to continue with the testimony or listen to the technical consultants.