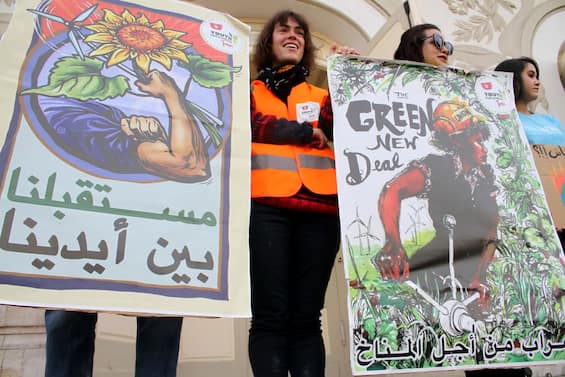 “There is no Planet B”, “Green New Deal”, “Youth for the climate”. The slogans are the same all over the world but this time the meaning is even deeper. Hundreds of young people engaged in the fight against climate change met in Tunisia for the climate camp of Tunis. The event gathers boys and girls mainly coming from Africa and the Middle Eastthe areas that have contributed least to climate change but are most affected today.

Young activists are preparing for what they believe will be one collective struggle for justice for their countries and their communities. An instance they will lead to the United Nations Climate Change Conference in November 2022.

The request: more funding to the countries most affected by the climate crisis

The campaign aims to bring the issue of funding for adaptation to new environmental conditions and that of compensation for damage caused by the richest and most industrialized countriesthose most responsible for global warming.

The boys of the Greta generation, inspired by the tenacious activism of the nineteen-year-old Swedish Greta Thunberg, remember well the promises not kept by world leaders. During the Cop26 in Glasgow 2021, the delegates indicated their intention to donate a total of 350 million dollars to help the most affected countries adapt to the climate emergency. But funding pledges have been broken in the past and remain a clash between the United States and Europe and the southern hemisphere.

The requests to be brought to Cop27

Some are in Tunis because they have lost faith in international politics and prefer to join the resistance that comes from local and indigenous communities. Among them there is Ayisha Siddiqa, 23, Pakistani activist. “I come from a tribal community in northern Pakistan and our way of life is in extreme danger as heat waves become more common, our glaciers melt and flash floods wipe out entire villages. These are things we cannot adapt to and from the loss of communities, cultures and families we cannot recover… “she told reporters from the Guardian.

Many of those participating in the Tunis climate camp will also be at the Cop27 to be held in Egypt. An encounter that is already making a name for itself. It comes from the environmental group Greenpeace criticism of the sponsorship of the event by the Coca-Cola companyone of the main international polluters.

In the 2021 report of the global Break Free From Plastic movement on the companies most responsible for plastic pollution, Coca-Cola is repeatedly identified as the largest plastic polluter in the world.