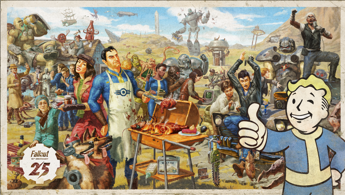 After four years, new content arrives for Fallout Shelter, while Fallout 76 can be played for free

Bethesda has kicked off the celebrations for the Fall-out series, which turns 25 this year. The celebration includes a free week of Fallout 76, new missions for Fallout Shelter, and discounts on games from the saga. Other initiatives will be revealed on the official website of the 25th anniversary. The free week of Fallout 76 is already active, and will end on October 10th. In addition, during the free week, Fallout 76 will be sold at a discounted price, allowing you to continue playing without losing progress. For the first time in four years, new content will be introduced in Fallout Shelter: players will be able to face an alien threat in a new series of missions with new enemies and new weapons, recruit new inhabitants and decorate their Vault with the new celebration theme. More information will be available next week with the launch of the update. Furthermore, throughout the middle of the month, the games of the Fallout series will be on offer on the digital stores for PC, PlayStation and Xbox. Steam players have until October 18th to take advantage of the anniversary sale, while the discounts for the Xbox and PlayStation platforms will end on October 12th.