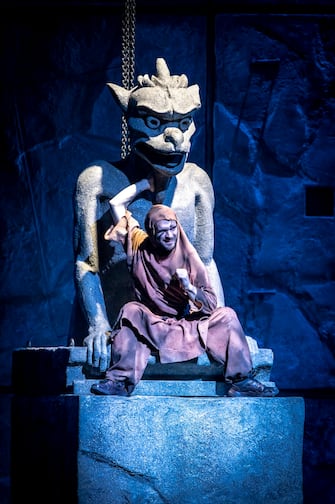 Notre Dame de Paristhe musical by Riccardo Cocciante, the most famous modern popular opera in the world, this year celebrates the twentieth anniversary of its debut on the Italian scene

WATCH THE VIDEO: Notre Dame de Paris, 20 years ago the debut in Italy

The first show in Italian was in fact held on March 14, 2002 at the GranTeatro in Romebuilt specifically for the occasion by the will of David Zard

On the occasion of the anniversary, only and exclusively for 2022, the show will return to be interpreted byentire original cast of the debut

Victor Hugo was born 220 years ago: his works adapted for cinema and TV

So they come back Lola Ponce as Esmeralda, Giò Di Tonno in those of Quasimodo, Vittorio Matteucci in the role of Frollo, Leonardo Di Minno like Clopin, Matteo Setti to play Gringoire, Graziano Galatone for the character of Febo, Tania Tuccinardi for that of Cornflower

For the occasion, special special guests of some of the special dates of the tour will be Claudia D’Ottavi And Marco Guerzoni respectively in the guise of Fiordaliso and Clopin, of which they were the first interpreters in 2002

Based on the novel of the same name by Victor Hugo, the Italian version of the show, edited by Pasquale Pannella with the eternal music by Riccardo Cocciantehas fascinated more than four million people in recent years

The tour, produced by Clemente Zard with the collaboration with Enzo Product LtdAnd entirely edited and distributed by Vivo Concerti and started on March 3, 2022 from Milan