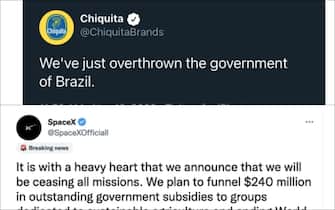 Storm on Twitter after Elon Musk made the new paid account verification system. Thanks to the purchase of blue verification ticks for 7.99 dollars, the “verified” fake accounts of famous people or large companies who chirped improbable things and which caused the real brands to lose money and stock market prices have multiplied

Among the first to be targeted by the creators of fake accounts was the pharmaceutical company Eli Lilly which, following the false tweet, would have lost 4% on the Stock Exchange. The post featured a fake company announcement about free insulin: “We are thrilled to announce that insulin is now free.”

Suddenly the former US president also returned to Twitter, from which he had been banned Donald Trump. But it was a fake who started tweeting a series of sentences such as: “I am proud to be back on Twitter and I give my total support to President Joe Biden for USA 2024”, “Joe Biden is a good man. A great leader”, “Obama was the best president of our lives”

Even the companies of Elon Musk himself have been at the center of social mockery. For example, from a profile Tesla with blue check (actually fake) they said that “a second Tesla hit the World Trade Center”

While the fake profile SpaceX he tweeted: “It is with a heavy heart that we announce that we will be ceasing all missions. We plan to channel $240 million in outstanding government grants to groups dedicated to sustainable agriculture and ending world hunger. We cannot look to other planets to solve our problems here”

Instead of pretending Lockheed Martinan American company active in the aerospace and defense engineering sectors, informed that the company would “stop selling all weapons to Saudi Arabia, Israel and the United States of America, until further investigation into their history of humane abuse ”

Among the big tech companies, the Applewhose fake profile spread the news about a particular company news: “Apple Air+. An all-new, innovative set of Atoms specially tuned to enhance your Apple Store experience. Now required for access to Apple Stores globally. We think you’re going to love it”

The fake Nestle instead he published a post with the caption: “We steal your water and sell it to you LOL”

Even famous people have not been exempt from being “copied”. The false LeBron James wrote: “I’m officially asking for a trade. Thank you Lakers for the support over the years. Towards better and bigger things”

Twitter, Elon Musk: “Risk of bankruptcy without revenue from subscriptions”