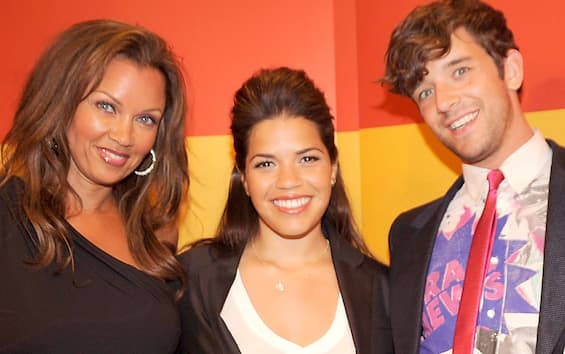 Nostalgic of the legendary television series Ugly Betty, keep your handkerchief close at hand because the photos we show you at the bottom of this article are guaranteed to be emotional.
Actress America Ferrera reunited with some of her colleagues from the series that made her a star: Ugly Betty, precisely. The star of the show immortalized herself in a selfie with co-stars Michael Urie and Vanessa Williams. “Betty and Marc and Wilhelmina. Some things never change” she wrote in the caption Betty (ah no, sorry: America Ferrera. Some things never change for us too).
The series of shots shared on America Ferrera’s official Instagram profile is the result of a dinner outing with three friends, three characters who weren’t such characters on the screen at all – if not with a few small exceptions – but instead between a take and they bonded a lot with each other.

Recall that at the beginning of 2022 Deadlines had announced that America Ferrera will be part of the film Barbie directed by Greta Gerwig. However, for now there are no new news related to her role in the film in which Margot Robbie and Ryan Gosling will respectively play the roles of Barbie and Ken.

You can look at the photos of America Ferrera, Michael Urie and Vanessa Williams (respectively in the series: Betty, Marc and Wilhelmina Slater) in the Instagram post that you find at the bottom of this article.

From 2006 to 2010 Ugly Betty made the hearts of many spectators beat faster who adored that unconventional character, that is the “ugly” Betty put in the title. A girl who finds herself working in a world in which the aesthetic (and style) canons imposed from above by the media and glossy fashion magazines are very different from hers. Glossy magazines of which the editorial staff where Betty goes to work is largely part: in fact we are talking about Modesa fashion magazine that is as famous and prestigious in the series as it is in reality Vogueso to speak.

The series is a remake of a 1999 Colombian telenovela, conceived by Fernando Gaitán and entitled Yo soy Betty, la fea. The protagonist of the American television series is Betty, played by America Ferrera. The protagonist is joined in the main cast by Eric Mabius, Vanessa L. Williams and Becki Newton, among others.

As for the reunion that Ferrera gave us a taste of on his IG profile, Michael Urie played the character of Marc, a bad homosexual boy who we will actually discover episode after episode that has a heart of gold (and this heart of gold gold will also emerge thanks to the complicity of the best and most genuine character of the show, the Betty put in the title). However Marc in the first seasons of the series presents himself as the Machiavellian assistant to the creative director of the magazine Modesthe fearsome and terrible Wilhelmina Slater.
It’s hard to find a chicer villain than her, maybe just the movie The devil wears Prada can see Meryl Streep/Miranda Priestley compete with Vanessa Williams/Wilhelmina Slater of Ugly Bettythere.

The shots shared by America Ferrera immediately ignited enthusiasm and hopes, those of those who hope that this alleged spoiler of hers could mean that a real reunion of Ugly Betty on set and around the corner.
Although the ways of the showbiz are infinite, the US media are almost certain that that eventuality is not around the corner, not at all. And the US media is relying on the statements of some of the most iconic faces of the show: Vanessa Williams.

The actress who plays Wilhelmina on the show was interviewed last year by the American magazine EW about the possibility of a remake of Ugly Betty.

The words of Vanessa Williams

“The idea would be great. Unfortunately, our creator-executive producer, Silvio Horta, died last year due to suicide, so I don’t know what the state of rights is,” said Vanessa Williams when asked by EW about the possibility of a remake. “We love each other, we keep in touch, but, who knows. At the moment, it’s not at all [possibile]”, these are the words of Vanessa Williams dating back to 2021.

The magazine EW however, he had brought the cast together in 2017 for a 10th anniversary panel discussion. On that occasion Ferrera had joked about the possibility of a continuation of the show. “Hulu is picking us up for a two-hour special, so we’ll find out [cosa è successo]“said Barbara Ferrera, “adding immediately after: “That’s not true, but if you tweet it… Get your phone out. Hashtag: Betty Reboot. We need a hashtag, let’s tweet it and then we’ll make Hulu buy the two-hour special ”.

You can check out the photos of America Ferrera, Michael Urie and Vanessa Williams in the Instagram post below.