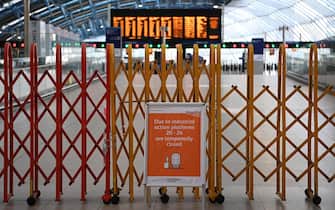 A historic railway strike is underway in the UK, the largest in over 30 years. For three days – today, Thursday and Saturday – there is a risk of paralysis in the country and, amid delays and cancellations, commuters are suffering major inconveniences

WATCH THE VIDEO: Summer Solstice, crowds at Stonehange to celebrate the sun

Furthermore, in addition to the trains stopped all over the country, in London there is also a subway strike to aggravate the situation

The train strike was called by the trade unions after the failure of the negotiations with the top management of the railway companies and Network Rail (public network manager). The dispute concerns above all the request for an increase in salariesincreasingly eroded by record inflation

The cancellation of 80% of the services has been estimatedso the advice is not to go to the stations, which appear deserted or with at most few people looking for departing convoys

Canceled flights, strikes and delays: what happens to air travel this summer

Millions of people have chosen to use other means to get around in this day of inconvenience, causing a severe blockage of the road network

The premierreturned to the leadership of the executive after a routine operation on his adenoids, on the sidelines of the Council of Ministers has launched an appeal to find a “sensible compromise” and put an end to the strike, but at the same time raised the accusations against the union leadership

The announcement of the three-day strike was made last night by the Rail Maritime and Transport Workers (Rmt) union, the most important in the sector, after no agreement was reached in talks with the top management of the railway companies and Network Rail (public network manager)

RMT general secretary, Mick Lynch, has pointed the finger at Boris Johnson’s conservative government: “It is clear that the Tory executive, after cutting £ 4 billion in funds from National Rail and Transport for London, has now actively prevented a solution to this dispute.”

The inconveniences for passengers concern the whole country but in particular London: the underground strike is also underway in the capital and it is difficult both to reach the city and to move inside