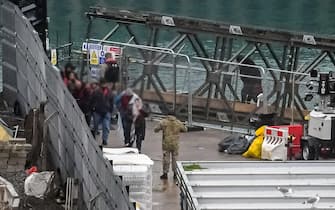 WATCH THE VIDEO: The first words of Rishi Sunak, the next UK prime minister

THE RECONSTRUCTION – The alleged attacker, a white man in a striped shirt, arrived in the center aboard a white Seat SUV. He got out and threw three petrol bombs, one of which did not explodeaccording to a photographer from Reuters

THE CASE OF DEATH – According to the photographer of the Reutersthe aggressor after the attack he would have taken his own life. A version not confirmed by the police, which claims as “the man has been identified and locatedAnd, to further questions, argues how investigations are still ongoing

THE PLACE – The attack took place at the center of the Western Jet Foil Border Force in the main port city of the English Channel, used to examine asylum requests from applicants. There Bbc announced that the fire caused from the Molotov cocktails was turned off

The Pope at his homily: “The exclusion of migrants is disgusting and criminal”

THE DECLARATIONS – A spokesperson for the Interior Ministry said: “We are aware of an accident at the Western Jet Foil, Dover, and the police are present. It would not be appropriate to comment further at this stage ”. A spokesperson for Kent Fire and Rescue said: “The Kent Fire and Rescue Service has been called up for an accident in Dover at 11:24 amwhere the teams put out the fires ”

WHAT WE HAVE SEEN – The scene was quite shocking for the city of Dover. As some witnesses reported to the Bbcwho were at the time of the incident near Shakespeare Beach, “it was all carnage and chaos. There was smoke in the air, with the smell and the noise which were the same to those of a war zone “

MIGRANTS IN GB – According to government data, yesterday 990 migrants they crossed the canal in small boats, bringing this year’s total to nearly 40,000. The Minister of the Interior Suella Braverman supported a plan to send migrants who illegally cross the Channel in a third country, such as the Rwanda

THE CONDITIONS OF THE BRITISH CENTERS – Immigrants who cross the Canal of the English Channel often arrive in desperate camps, characterized by overcrowding. An example is Manston, where conditions are difficult. The shadow secretary of the interior, the Labor Yvette Cooper, he told the BBC: “We need to review the whole system and prevent boats crossing the Channel put human lives at risk. In Manston there are outbreaks of diphtheria “

A HATE SPEECH – According to Clare Moseleyfounder of the Care4Calais campaign, “we are seeing an escalation of hate on social media and threats against our volunteers. The rhetoric of the ministers of this government is shocking and divisive. They call the refugees in Calais illegal immigrants despite ample evidence that they are genuine refugees who they are in desperate need of help. It would be kinder and more effective to just help people than to continue this harmful campaign “he told al Guardian