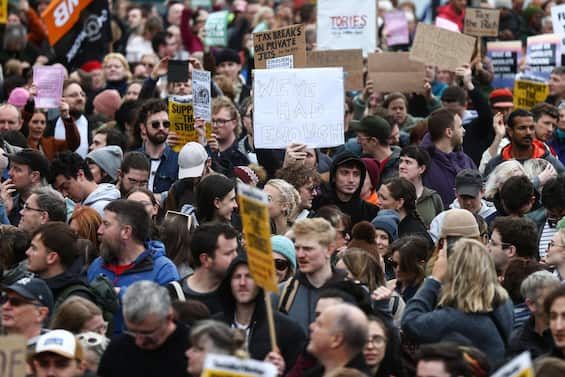 Protests in the UK, where thousands of people took to the streets in different cities to protest the crisis and the rising cost of living. The criticisms mainly concern the tax package presented last week by the new prime minister Liz Truss. The new Conservative government had promised immediate action to address the crisis, but the announcement of massive tax cuts and tax incentives sparked anger and misunderstanding. In London the demonstrators converged, after the appeal of various organizations, towards Westminster, in the center of the capital.

Strikes resume in the country

Meanwhile, the plan of Truss and Chancellor Kwais Kwarteng, which also provides for the reduction of medium-term debt, was rejected by the rating agency Standard & Poor’s which has revised down its forecasts for the sustainability of the British sovereign debt. According to a recent YouGov poll, more than half (51%) of the population believes the prime minister should step down. In the country, distracted for two weeks by the death of Queen Elizabeth II, sectoral protests have also begun at full speed: railway workers have planned a week of carpet strikes, with only 11% of traffic insured. And on the streets of London, as in other cities in the UK, protesters are calling for support for more strikes.

Tension among the Tories

Meanwhile, the Tories open the Congress on October 2 and will meet in Birmingham for the annual meeting. The Party is divided and letters of challenge against Liz Truss continue to arrive from the ‘friends’. Some conservatives are stunned by the confused budget announcements the new prime minister made, others miss former prime minister Boris Johnson. Meanwhile, the decentralized administrations of Scotland, Wales and Northern Ireland have started pressing on Kwarteng to meet their finance ministers to discuss upcoming measures.