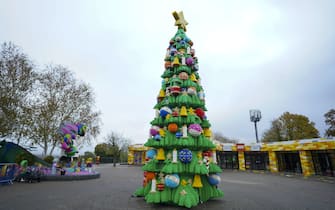 The tree decorated for the Christmas holidays is composed of 364,481 bricks colored between Lego and Duplo

China, Legoland Sichuan will open in 2023

The Legoland Windsor Resort beat himself: in 2014 a Christmas tree with 300,000 bricks

Even the Legoland of San Diego has her own brick-built Christmas tree. Considered among the most beautiful Christmas trees in the world, however, is made up of “only” 245 thousand Legos

The Legoland Windsor Resort is one of several Legoland parks that exist all over the world, from the USA to Dubai, passing through Japan

For the holidays, the theme park is decorated with the colors of Christmas and offers the opportunity to experience a meeting face to face with Santa Christmas

Where is it Santa Claus? In his log cabin, where young and old are hosted and even receive a special Lego gift

In the photo: another image of the tree set up all in Lego