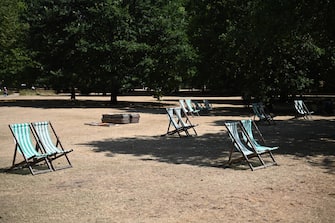 Record heat in the UK. Exceeded 40 ° C in various areas, for the first time, as reported by the Met Office (the Meteorological Office)

Sky Voice, Drought and climate change, what future awaits us: WATCH THE VIDEO

The Met Office has made it known that a temperature of 40.2 ° C was recorded at London Heathrow at 11.50 this morning

Suffolk hit a high of 38.1 degrees yesterday, close to the British record of 38.7 set in 2019. But the heat wave has grown of intensity in the last few hours

WATCH THE VIDEO: HOT RECORD IN THE UK

The same Met Office issued a red alert covering much of England central, north and south-east, including major cities such as London and Manchester. The British try to escape the heat wave by cooling off in the sea, rivers and lakes

For today they have been Travel by train is strongly discouraged and there are inconveniences and cancellations in the national railway network, particularly in areas with higher temperatures