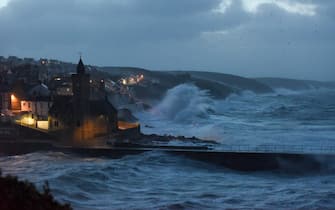 The alert is high for the storm Eunice which is coming down on the United Kingdom. Millions of people in the country have been told to stay at home. The storm is the worst in decades. Reported a first death in Ireland, in County Wexford, about 130 kilometers from Dublin. The victim was hit by a tree uprooted by the fury of the wind

According to reports from the BBC, the Met Office today issued a second rare red weather alert for London, as well as much of the south and south-east coast of England. On the British Isles the storm brought gusts of wind around 150 kilometers per hour and peaks close to 200

Wind storms in Europe, sunshine in Italy and up to 20 ° C

In the capital, all the precautions were taken and the industrial buildings and structures have been secured. Eunice has also hit the north of France and other countries of central-northern Europe where winds are currently just above 100 per hour

Storm Eunice caused damage to parts of the roof of the O2 arena in London. In the UK at the moment they are only registered some injured or bruised, among people hit by debris; as well as damage to buildings and various structures. Transport chaos also continues, with around 400 flights canceled at British airports alone (20% of the total at Heathrow, the largest of London’s airports) and several others forced to suffer delays or repeated breathtaking landing maneuvers.

In Paddington station in London, signs indicate canceled trains and warnings. There are also indications of attractions that remain closed and accidents in some areas. While the port of Dover, on the English Channel, has suspended its activities for a few hours as a precautionary measure

The red alert means there is a life threatening due to flying debris, which affects the entire territory of south-west England and south Wales. OnIsle of Wight, reported record wind in the middle of storm Eunice which struck today across the Channel. The British Met Office, has detected a gust equal to 195 kilometers per hour, which is the most violent ever recorded in England since the current calculation tools exist.

Eunice is the second storm in a week for the UK after the storm Dudley it hit parts of Scotland, northern England and Northern Ireland, leaving thousands of homes without electricity

TO Tow Lawin County Durham, snow is shoveled in front of clubs and shops

We are in action to make the roads accessible snow plow vehicles and personal. However, the population is advised not to leave the house

Very high waves submerged the lighthouse of Porthcawl in Wales

The waves a Porthleven in Cornwall