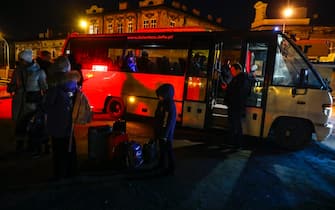 I am already more than half a million refugees fleeing the war in Ukraine and about 35 thousand of them have already reached a second destination with respect to the country where they fled. This was stated by the UN High Commissioner for Refugees (UNHCR), Filippo Grandi

WATCH THE VIDEO: War in Ukraine, the drama of refugees

“We may have only seen the beginning,” said Grandi, speaking of the humanitarian situation in Ukraine during the Security Council meeting. “Hundreds of thousands of Ukrainians are seeking refuge in neighboring countries – he added – We are currently planning to have up to 4 million refugees in the next few days e weeks”

POLAND – According to a count made by UNHCR when the total number of refugees was slightly below 500,000, more than 280,000 people had already fled from Ukraine to Poland. According to Polish border guards, 90% of those who arrived were hosted by friends or relatives, but reception centers were also set up near the border

Poland already hosted 1.5 million Ukrainians before the Russian invasion. All over the country, Poles are mobilizing with offers of accommodation, money, clothes and work. In total, more than half of the refugees from Ukraine are in this country

Russia-Ukraine war, what is Defcon and how it works

ROMANIA – According to UNHCR, 32,500 Ukrainians have entered Romania since Thursday. According to the Bucharest government, there were about 47,000, but 22,000 have already reached other countries

Most pass through Siret, in the north of the country, where a reception camp. A second reception camp has been set up near Marmatiei. The Romanians, with the help of social networks, are organizing for donations of food and clothing for refugees

HUNGARY – Almost 85,000 people have entered Hungary from Ukraine so far, according to UNHCR. Several border towns such as Zahony have set up shelters in public buildings and ordinary citizens are donating food and clothing.

SLOVAKIA – According to UNHCR, some 30,000 people have fled Ukraine to Slovakia since Thursday. The Slovak Interior Ministry reported that 6,514 crossed the border on Sunday between midnight and 6am only

BELARUS – More than 300 refugees have entered Belarus, according to UNHCR. The UN refugee agency said on Monday that some 34,600 of those who fled Ukraine to neighboring countries had already moved to other European countries.

INTERNAL REFUGEES – There are believed to be around 160,000. “Displaced people in Ukraine are on the rise, but the military situation makes it difficult to estimate numbers and provide aid,” Grandi tweeted two days ago.