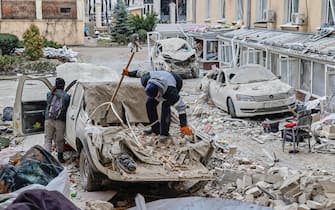 While Ukraine continues to be at the center of Russian attacks, gods have been spread advice on how citizens can try to protect themselves from bombing

WATCH THE VIDEO: Ukraine, the destruction in Kharkiv after the Russian attack

At the sound of sirens in the various cities, many run to shelters to seek shelter from bombs: in the underground tunnels, in the basements, in the cellars. For those who are unable to reach the collection points in good time and stay at home, the “rule of two walls” to follow

According to this rule, one must seek a place that is separated by at least two barriers from the outside

Ukrainian war, the mayor of Kiev invites the Pope: “He can open the way to peace”

The shelter – a closet, a basement or a cellar – should also meet other needs. The place for shelter, for example, must have at least two exits on opposite walls to allow an escape route in case of fire or in case one of the two entrances remains blocked

And again, the Ukrainian media write, there must be a water supply and sufficient ventilation. They also stress that “many official shelters are not suitable for the real threat, such as basements”.

“Shelters that do not meet these requirements are very dangerous: they can become a grave“, the Ukrainian media still recall, citing what is a sort of survival manual under Russian attacks. Citizens are therefore invited to follow the instructions

If a well-equipped refuge is far away, it is better to take shelter in the house following the “rule of two walls”, they reiterate again

In Kiev, subway tunnels are transformed into shelters at night, stopping the transit of wagons when the curfew takes effect. All those who were unable or unwilling to leave the capital converge there

Many people they come with mattresses, curtains, food, warm blankets and stoves