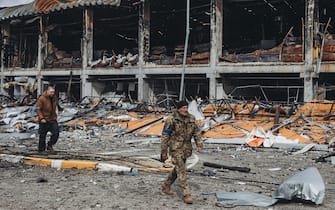 Some Russian influencers and well-known personalities have pointed the finger at Chanel for having prevented them from purchasing the products of the brand due to their nationality. All reported episodes would have happened abroad. Since the beginning of March, the well-known brand has in fact closed all its boutiques in Russia in response to the conflict in Ukraine, which has been going on for over a month.

WATCH THE VIDEO: War in Ukraine, desperate voices from the Bucha massacre

Among the socialites who have complained in public there is Anna Kalishnikova, a 37-year-old Russian presenter and singer. In a post on Instagram (which is blocked in the country) he wrote a long dida which reads among other things: “Chanel refuses to sell its products. In Western boutiques they ask for identification data and when you call with your Russian number, sellers now say we sell things to Russians only with the promise that they will not take them to Russia and wear them there. Russophobia in action. ”

In the post, Kalishnikova then goes into more detail. She tells that she was in Dubai on vacation and who walked into a Chanel boutique. “I often come to Dubai as a guest of Fashion Week, Chanel managers recognized me, approached me and said ‘We know you are a celebrity in Russia, we know you will shop there, so we cannot sell you our brand. ‘”

Russia, from VK to Rossgram: the apps that want to replace Instagram and western social networks

A similar episode would also have happened to another influencer, Yana Rudkovskaya. “This is a shock to a woman who has bought Chanel and Chanel Haute Couture for more than 20 years, and that she sat front row at the shows,” reports The New York Post, reporting her comment and the fact that she has spent over the years one million euros for the brand’s products. Rudkovskaya would also have called the ban “humiliating”

Pregnant woman, symbol of the bombing of Mariupol reappears in a video. Kiev: “Kidnapped”

Liza Litvin, another influencer, denounced that a Chanel boutique in the Emirates did not sell her a bag due to her nationality while Snezhanna Georgieva, wife of a well-known millionaire, allegedly hinted that the prohibition is circumventable. “I will be very happy when these brands return, but we know some boutiques are still open when a regular customer calls them,” she said according to the New York Post.

The testimonies of the influencers reported by the New York Post

The spokesperson of the Foreign Ministry, Maria Zakharova, made herself heard on the matter. You accused the brand of a “russophobic campaign to wipe out Russia” and repeated the slogans of the Russian propaganda according to which the country is only carrying out a denazification operation in Ukraine

What is true in this story? A Chanel rep told Business of Fashion, one of the most respected fashion magazines, that there are indeed restrictions, but these are the result of sanctions imposed by the West on Russia in response to the conflict in Ukraine

The Business Of Fashion article

In a note reported by the New York Post, the company also states: “We understand that these measures, aimed at meeting the requirements of the laws, can create some inconveniences to our customers. We are working to improve the procedures and we apologize for any misunderstanding and inconvenience related to these ”

It is not the first time that Russian influencers have complained about the consequences on their lives of the conflict in Ukraine. A while ago, a video circulated in which a girl was crying because of Moscow’s decision to block Instagram