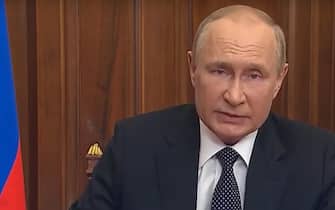 The territories of Ukraine who announced the referendum for accession to Russia They “have the support” of Moscow. The Russian president said so Vladimir Putin in a televised speech, during which he then threatened: “Those who try to blackmail us with nuclear weapons they should know we have them too ”. And it is precisely in the question of the referendums that one can be glimpsed atomic drift Of the war: Here because

WATCH THE VIDEO: Because with Putin’s referendums the nuclear threat grows

After a postponement last September in the organization of the vote, the self-proclaimed autonomous republics of Donbass, Lugansk and Donetsk – already recognized independent by Vladimir Putin on the eve of the invasion -, and the areas of the oblasts of Kherson And Zaporizhzhia – under Russian control from the early stages of the offensive – on September 20 they called consultations for the referendum on annexation to Russia between 23 and 27 September

The decision was invoked on September 19 in a phone call between the two leaders of the self-styled republics, Leonid Pasechnik (in the picture) and Denis Pushilinthen endorsed the next day by the Vice-President of the Russian Defense Council, Dmitri Medvedevwho spoke of “restoring the historical justice” and of “Liberated territories” by the forces of Moscow, with the same rhetoric with which the foreign minister Serghei Lavrov supported the desire “of the peoples of Donbass to be masters of their own destiny”

According to the pro-Russian plans, referendums will be held in person and onlineofficially “for security reasons” given the Ukrainian attacks in the affected areas. The result will be decided on simple majority, without a quorum, and will not have to be confirmed by any third party, Russian agencies report. “You want the Zaporizhzhia region detaches from Ukrainebecome an independent state e join the Russian Federation?“: will be the question posed, both in Ukrainian and Russian, in the occupied area of ​​the oblast which also hosts the nuclear power plant

And it is the result of these referendums that opens the specter of one nuclear response by Russia. “The Kremlin has signaled that if Russia were to proceed with the annexation, even if no other country recognized itany further military action by Ukraine in those regions could be seen as an attack on Russia itselfjustifying any military response of the nation with the largest nuclear arsenal, ”explains the New York Times

Ukraine, Putin: “The West wants to destroy us, we will use all means to defend ourselves”

At the root of this fear is the Moscow defense doctrinewhich involves the use of tactical nuclear weapons in the event of aggression against Russia with the use of weapons of mass destruction or conventional that threaten “the existence of the state, the sovereignty And integrity territory of the country “. If the territories of the referendums came “Russified”, attacks in those areas would be considered in the territory of Moscow and, as said by Medvedev (in the picture)“The invasion of Russian territory is a crime that allows the use of all self-defense forces “

Medvedev to Europeans: “At the polls, punish your idiotic governments”

At the news of the referendums, Kiev reacted with anger but also with mockerydefining them “illegal,” stupid blackmail “ of those who are “afraid of defeat”: “Ukraine will resolve the issue threat it can only be eliminated by force. “” Referendums farce are signs of weakness, del failure Russian “, the US ambassador to Ukraine wrote on Twitter, Bridget Brink (in the picture): “The United States they will never recognize Russia’s claim to annex Ukrainian territory, and we will continue to stand alongside Ukraine for as long as necessary ”

A position already expressed atUN General Assembly by the US National Security Advisor, Jake Sullivanwhich in turn spoke of “a farce” referring to dubious transparency of consultations referendums. Same word used by the German Chancellor Olaf Scholzby the French president Emmanuel Macron and by the secretary general of NATO Jens Stoltenberg. “The referendums for independence in Donbass are yet another violation of international law which we strongly condemn, “he also said Mario Draghi

Pope Francis: “Arms to Ukraine? Defending oneself is lawful”