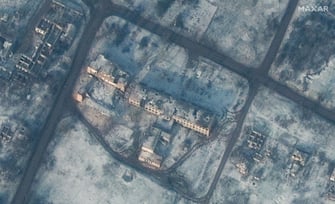 A city almost completely destroyed. This is what the satellite images taken by the US represent Maxar in the cities of Bakhmut and of Soledarin the Donetsk oblast of Ukraine, which has been under furious attacks by Russian forces for days

The images posted on Twitter represent, after five months, the before and after of Russian cities following the fighting. The grounds are marked by dozens of craters created by explosions

Beginning of the siege a Soledarin eastern Ukraine, in an area full of houses and apartments, dating back to August 1, 2022

The same area, the January 10, 2023. The mining town of Soledar is destroyed, but i fighting continues and the eastern front line “holds”, as explained by President Volodymyr himself Zelensky

Start of bombing a Bakhmutskein an area with schools, at the beginning August

The country, conquered by the Wagners as of December 2022, it is now destroyed. Some observers have stated that the invaders after all these months are less accurate and therefore tend to saturate the target until it is conquered