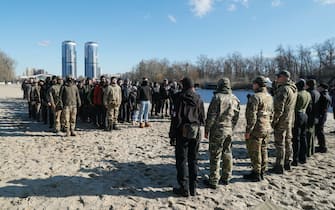 In view of a possible attack on Ukraine by Russia, military exercises were organized of civilians in Kiev. Right Sector activists have called for a day of gun trials, with participation on a voluntary basis

WATCH THE VIDEO: Ukraine, school of war. 130,000 Russian soldiers on the border

In addition to the capital, the exercises are also carried out in other territories such as Odessawhich is located right in front of the Crimea

According to a survey conducted by the Kiev International Institute of Sociology (Kiis) in December 2021, the 50.2% of Ukrainians he has declared that he would have resisted in the event of a Russian military intervention in your city, town or village

Citizens of all ages participate in the days of military exercise. There are also children that they embrace rifles and pistols and learn defense techniques

In the basic course the phases of first aid and how to upload e shoot with a rifle or with other weapons. There are also more specific courses, from refresher courses on war material up to urban warfare tactics

Meanwhile, the Ukrainian Center for Defense Strategiesas reported by the Kyiv Independent, indicated that as of February 12 it is estimated that “the total number of Russian troops along the borders of Ukraine, including those in Belarus and in the occupied territories of eastern Ukraine and Crimea, is of 87 battle groups, approximately 147,000 militaryincluding air and naval personnel ”

Experts explain that the Russian troops “I am equipped with the appropriate weapons and vehicles, as well as logistic and medical support units. However, so far there are no signals that have the additional reinforcements needed for a large-scale offensive. ”

Always the Center for Defense Strategiesan independent think tank that brings together leading Ukrainian and international experts, argues that “the Russian forces they are actively playing combat training and operational activities. Joint exercises of the armed forces of Russia and Belarus, called ‘Allied Determination 2022’, are currently underway and are expected to end on February 20 ”