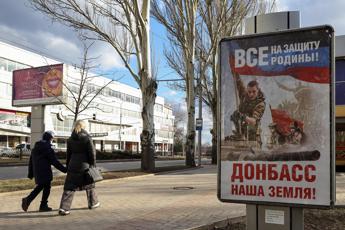 “The entire territory of the region will be liberated”

After the annexation of the Donetsk People’s Republic to Russia, following the referendum that ended yesterday, “a new phase of combat operations” will begin in Ukraine, said the leader of the region Denis Pushilin, on his way to Moscow to complete , as he anticipated, “the legal procedure” for inclusion in the Russian Federation.


“The entire territory of the ‘Republic’ will now be liberated,” he said, quoted by the Russian news agency Tass. At present, Ukraine controls 40 percent of the territory of the Donetsk region. The Kremlin spokesman, Dmitry Peskov, confirmed, again today, that the special military operation will go on at least until the Donetsk People’s Republic is completely liberated ”.

Vladimir Putin is expected to announce on Friday the annexation of the southeastern regions of Ukraine (as well as Donetsk and Luhansk, as well as Kherson and Zaporizhzhia) in his speech to the Federal Assembly. But for now the emphasis remains on the two republics of Donbass.

Local authorities have proclaimed the victory of ‘yes’ for the request for annexation to Russia in the referendum considered as a farce by Kiev and the allied countries, not only in Donetsk, but also in the other three regions. The leader of the Luhansk People’s Republic, Leonid Pasechnik, is also arriving in Moscow.

Peskov then assured that “one way or another” Putin will communicate with Pushilin and Pasechnik (no reference to the administrators of the other two occupied regions, however).