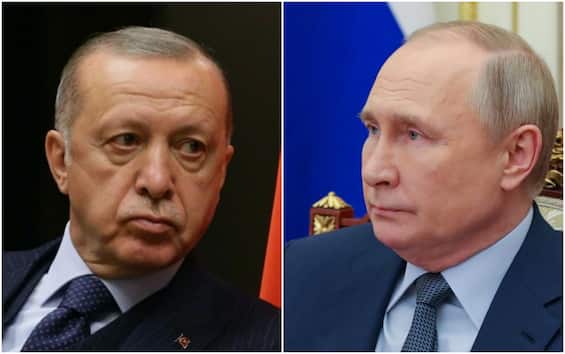 The President of Turkey Recep Tayyip Erdogan returns to talk about the war in Ukraine and is unbalanced on the intentions of his Russian counterpart Vladimir Putin, after the meeting he had with him in Samarkand on the occasion of the 22nd summit of the Shanghai Cooperation Organization (Sco ). “I have the impression that he wants to end the conflict,” the Turkish leader said in an interview with American TV PBs. That he then reiterated his desire to mediate between the parties and asked for the “return to Kiev of all the invaded lands, including Crimea”.

“He is showing me that he is willing to put an end to this situation as soon as possible,” the Turkish leader said of Putin. According to him, the sudden opening of the head of the Kremlin to a supposedly negotiated solution to the war would depend on the evolution of the conflict on the ground. “The way in which things are going now is rather problematic”, explained the leader in what seemed a clear reference to the reconquest of over 2 thousand square kilometers scored in the last week by the Ukrainian forces against Moscow. .

“In Kiev all the occupied territories”

Erdogan, who on several occasions has shown closeness to Putin without sparing attacks on the West, said he was firm in wanting to ask Russia to return all the invaded areas. “If peace is established in Ukraine, obviously the restitution of the lands that have been occupied will become very important. Moscow has taken some steps in this direction and so have we,” said the Turkish president. : “We have been talking about it with my dear friend since 2014 and we have repeatedly asked him to leave her. But unfortunately in this case no progress has been made”.

Pending what Erdogan himself called “a significant step forward”, other relaxing actions against Kiev would have been promised by Putin to Turkey. Among these, also “the exchange of 200 prisoners following an agreement between the parties”. Meanwhile, Ankara’s mediation continues to speed up negotiations: “All we want to do and we want to see is to end this battle with peace. Whether it’s Putin or Zelensky, I’ve always asked and recommended this. People are dying and no one will win at the end of the day, “concluded Erdogan.