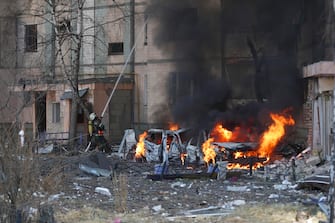 In the latest update of theBritish intelligence we read that Russia has deployed some missile batteries in Belarus, apparently more to signal Minsk’s growing involvement in the war in Ukraine than for concrete tactical reasons. But what are the devices deployed? And what are they for?

“The pictures showed that two MiG-31K Foxhound interceptor jet they were almost certainly parked at Machulishchi airport in Belarus on October 17, with a large one tank stored nearby within a protective earth dock, “reads the bulletin

THE SPECIAL ON THE WAR IN UKRAINE

“The container is likely associated with the AS-24 Killjoy air-launched ballistic missilea large ammunition that the MiG-31K variant is suitable for carrying ”, the British report reads again

War in Ukraine, Kiev will use Turkish drones to fight Iranian kamikaze aircraft

“Russia ranks Killjoy since 2018but previously it was not deployed in Belarus “, London 007 continues,” Russia occasionally threw these weapons during the war in Ukraine, but supplies are probably very limited ”

According to British military intelligence, Moscow “continues to spend its advanced long-range ammunition against objectives of limited importance operational ”

“With a radius of over 2,000 km, deploy Killjoy in Belarus offers Russia a little added bonus in terms of hitting further targets in Ukraine, “concludes the bulletin,” probably carried out the deployment mainly for send messages to the West and portray Belarus as increasingly complicit in the war ”

It should also be noted that the Killjoy it can travel up to 12 times the speed of sound and its ability to be launched from the air via a jet makes it nearly impossible to detect and neutralize it from a defensive position. If launched from Belarus, this type of missile could hit London in about nine minutes

According to what he writes NewsweekFurthermore, the AS-24 “Killjoy” missiles are also capable of reach much higher speeds to those launched by the systems HIMARS Americans supplied to Ukraine


Russia, Putin allegedly simulated the destruction of the UK and the US in a nuclear exercise