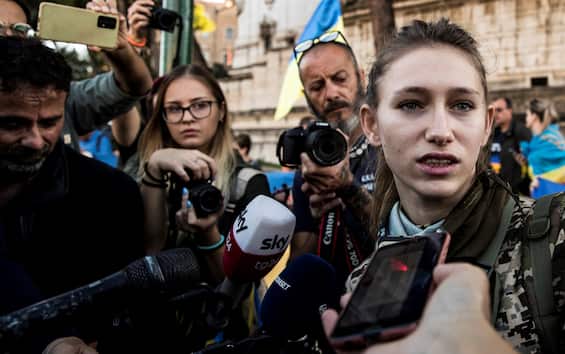 “I am finding with you the recognition that I have not had up to now in Italy. I am finding it among you here in Rome. I think that Italy has lost an excellent military”. She said Giulia Schiff, a 23-year-old ex-Venetian pilot who was once a student of the Academy of Pozzuoli: she had been expelled from the air force after having repeatedly reported being a victim of hazing during the so-called “baptism of flight”. In March 2022, you decided to go and fight in Ukraine in favor of Kiev. She has now returned to Italy for a few days and participated in the demonstration of the Christian Association of Ukrainians in Italy in Rome. “So far I have not seen any Italian weapon”, added she Schiff. She then specified that she had been “beyond the front line, in particular doing reconnaissance activities. If I’ve ever killed anyone? I can’t talk about it, but I’m still a soldier “(WAR IN UKRAINE: THE SPECIAL – THE UPDATES).

“In Ukraine I found a family”

To the microphones of Sky TG24 Schiff remarked that “this is a forced war, we did not ask for it. The only way is for Putin to stop and stop with these war crimes, for our part we cannot stop until he stops ”. One of Putin’s crimes, he said, is the use of chemical weapons, such as phosphorus and magnesium bombs and others whose composition is unknown. “The Russians make systematic use of it all along the war front,” Schiff denounced. “In my team (in Ukraine, ed) I found something I have never found in the Air Force: a family, ”he added. About her family and how she made her decision to enlist, the former Air Force student explained: “It wasn’t easy, it was hard to accept it and it took time. However, they are still proud of me ”.

Schiff: “Italy should be more in solidarity with the Ukrainian people”

The Italians “would like peace, but the war is not in Italy, it is in Ukraine”, Schiff said to the microphones of the Agi news agency. And he added: “My message is that Italy should be more supportive with the Ukrainian people: many civilians are dying, I am here to bring my testimony to the Italians far from this situation to open their eyes. The reality is different from what we see on TV and in the newspapers. “Schiff is a volunteer in the Special Forces of the International Legion, alongside Kiev against the forces of Moscow.” Serving Ukraine as a military is a great honor, “he continued. “We are many foreigners here fighting, but not the numbers we have seen reported in the media. I’m not afraid, they have to try to kill me.”

I hug her with Trenta

At the sit-in, where the red and black flags of the Organization of Ukrainian Nationalists also appeared among the flags, the other special guest was war veteran Roman Maksymets, wounded in 2016 at the age of 32 in Marianka, Donbass, where he lost two legs and an arm on the front line. Among the demonstrators there was also the former defense minister in the yellow-green government, Elisabetta Trenta, who embraced Schiff: “We are friends and Giulia’s Italian affair marks a defeat for our country. I, however, advised her not to leave. “said Trenta.