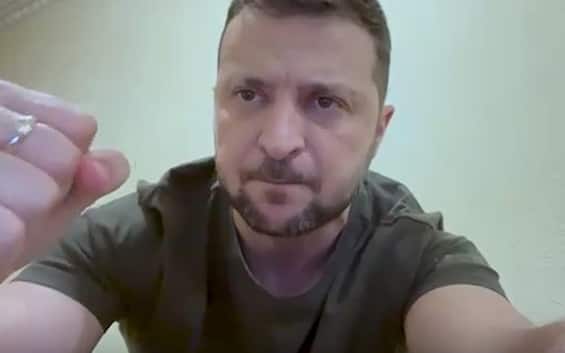 “We know we need unanimity”

“We are de facto allies. We have already completed our path towards NATO. We have already demonstrated the ability to interact with the Alliance standards, they are real for Ukraine, real on the battlefield and in all areas of our interaction. “, Zelensky said. “We trust each other, we help each other and we protect each other. This is the Alliance. De facto. Today Ukraine is applying for it to become” de jure ‘. With a procedure in line with the importance for us of the protection of our entire community. Under an accelerated procedure “.

The Ukrainian president then continued: “We know it is possible. We have seen Sweden and Finland start the procedure this year without an accession plan. This is right. This is also right for Ukraine. This consolidates this at the level of the Treaties. what has been done in life and what our values ​​are. “

“We understand that this requires the consent of all members of the Alliance. We understand that this is necessary to achieve this consensus. And yet, as this happens, we offer to implement our proposals regarding security guarantees for Ukraine and all. in Europe in line with the Kyiv Security Compact, developed and presented to our partners. Security has no alternative. But determination is needed to guarantee it. We are taking a decisive step by signing the accelerated access request to NATO “, he added.

“Farce annexation, no negotiations as long as Putin is around”

“Russia already knows. She feels our strength. You see that it is here in Ukraine that we test the strength of our values. And that is why it is in a hurry, organizes this farce with this attempted annexation, tries to steal something that does not belong to it, wants to rewrite history and redraw the borders by killing, torturing, blackmailing, lying “.” Ukraine will not allow it “. he added, warning that peace will only be restored by “driving out the occupiers”.

If Ukraine is ready for dialogue with Russia, a negotiation on “an equal basis, honesty, decency and fairness” is impossible with Putin, so talks will only be possible “with another Russian president”.

“Zelensky wants to join NATO quickly. Great idea. He’s just asking the North Atlantic Alliance to hasten the start of a third world war.” So on Telegram the vice-president of the Russian security council Dmitri Medvedev after the Ukrainian president’s request for NATO membership.