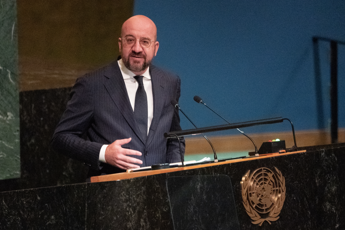 “Today Russia is scary. The Kremlin has brought the war back to Europe. And he acts as a blackmailer. “The President of the European Council Charles Michel said at the UN General Assembly in New York.” We cannot let the destructive action of one of us endanger our ferocious will to act for the common good “, he adds. Russia” combines the violence of weapons with the poison of lies “.


“Russian security has been threatened for years by the West, I say this in quotation marks. It is false. The Kremlin is trying, I hope in vain, to mobilize the rest of the world against an imaginary enemy. Nobody threatened, attacked or invaded Russia“stresses the president of the European Council.” And no one in Europe wanted a conflict with Russia. What interest would we have in endangering the security and prosperity of all of us? “, He adds.

The war in Ukraine “is an unprovoked, illegal and unjustified aggression”. “And it is because we have to stop the Kremlin war machine that massive economic sanctions have been inescapable,” he adds. The EU “does not ask anyone to choose between East and West, between North and South. But there is a choice to make: is the choice of the EU is for the respect of the borders, rather than for the aggression. It is for cooperation, not for the threat. “

“Hopefully emerging powers, including China, sincerely participate in collective efforts for peace and development“.” We support stability in the Taiwan Strait. We recognize the one China principle. But we will not close our eyes to human rights violations, especially in Xinjiang and Hong Kong “.

The President of the European Council Charles Michel quotes Modibo Keita, the first president of independent Mali, to brand the war waged by Russia in Ukraine as “imperialist”, before the UN general assembly in New York. Keita in 1963 said in Addis Ababa, on the occasion of the foundation of the African Union, that “imperialism – recalls Michel – is the manifestation of the dominion of man over man, of one society over another, of a people over another people, to want to impose their way of thinking, life, political and economic development at all costs. “Imperialism and revanchism. These are the only foundations of this colonial war that targets Ukraine, deliberately violating the international law and the Charter of the United Nations “.