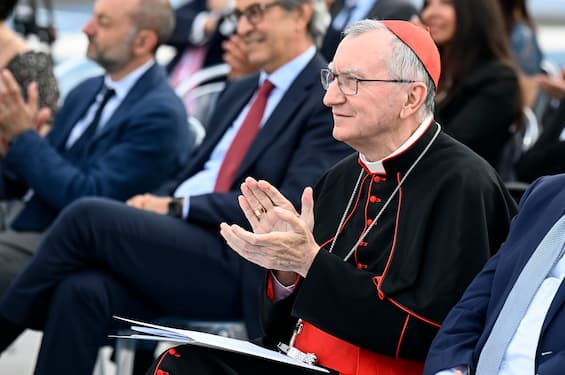 In the war between Russia and Ukraine, as in all conflicts, “disarmament is the only adequate and decisive response to these problems, as the magisterium of the Church maintains”. This is said by the Cardinal Secretary of State Pietro Parolin in an interview given in Limes, where he invited to reread the encyclical Pacem in terris of St. John XXIII: “It is a question of a general disarmament and subject to effective controls. In this sense , I do not think it is correct to ask the attacked person to give up their weapons and not to ask, even before, the attacker “, argues Parolin. The divisions between the Ukrainian Orthodox Church and the Moscow Patriarchate, following the war, are deep but “I don’t know if it is appropriate to speak of a ‘schism’. Of course, the war in progress, which involves peoples who are brothers in the Christian faith and that, for the most part, celebrate the same liturgy, it represents a deep and bloody wound for Eastern Christianity and for all Christians. Again, it is still too early to understand the consequences of what is happening, but it is certainly more shocking and It is scandalous that Christians, in the heart of Europe, are the protagonists of such tragic events “, he said.

The tragedy of the war in Ukraine still does not show a sincere desire to enter into a peace negotiation on the part of both sides, is the observation that the Vatican secretary of state entrusts to Limes. “The Pope’s voice is often vox clamantis in desert (‘a voice crying in the desert’). It is a prophetic voice, of far-sighted prophecy. It is like a sown seed, which needs fertile ground to bear fruit “, he notes. “If the main actors of the conflict do not take his words into consideration, unfortunately, nothing happens, there is no end to the fighting”. “Even today in the tragic Ukrainian affair, there seems to be no readiness to enter into real peace negotiations and to accept the offer of a super partes mediation”, adds the cardinal.

“To say that the Pope is pro-Russian? A simplification”

To say that the Pope is pro-Russian is a “simplification” that does not take into account the fact that “Pope Francis condemned the Russian aggression of Ukraine right from the start, with unequivocal words, he never put the aggressor and the attacked on the same level. nor was it or appeared equidistant “, explains the cardinal Vatican Secretary of State. “I confess that this simplification scares me a little. Is the pope pro-Russian because he invokes peace? to use the resources available to fight hunger and thirst in the world, health, welfare, education, ecological transition? The pope is pro-Russian because he invites us to reflect on what has led to these disturbing and dangerous developments, recalling that a coexistence based on military alliances and economic interests is a coexistence with feet of clay? Is the pope pro-Russian because he asks to apply the ‘peace scheme’ instead of perpetuating the ‘war scheme’? “asks Parolin.