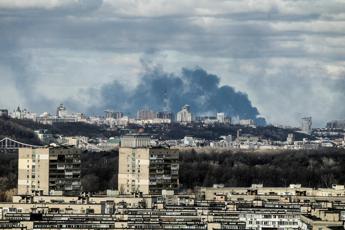 Vsevolod Kniaziev, president of the Supreme Court of Ukraine, responds to the Adnkronos on the evidence gathered to date to indict Putin

“There are various lists and photos of Russian military personnel on the Internet who may be involved in unthinkable crimes in the Kiev region, but evidence gathered and recorded by authorized agencies may be appropriate for judicial institutions. Indeed, much effort is being made to record, document and collect evidence of war crimes committed by the occupying army. Ukraine has no right to make mistakes in this process. ” Vsevolod Kniaziev, president of the Supreme Court of Ukraine responds to the Adnkronos on the evidence gathered to date to indict Putin for war crimes and the identification of battalion leaders who raped, burned women and children, including in Bucha.


“Iryna Venediktova, the Attorney General, and her subordinates are responsible for these problems.” , all information can only be obtained through official communication channels “.

Ukraine, he explains, “has not yet ratified the Rome Statute, but the Constitution of Ukraine provides for the possibility of recognizing the jurisdiction of the International Criminal Court. Despite the fact that Russia is not a state party to the Rome Statute and not recognizes the jurisdiction of the International Criminal Court, there are many mechanisms to bring the Russian leadership to justice. In particular, a special international court “.

“The fact that Russia – he continues – tried to start a United Nations meeting on Bucha, motivated by artificial circumstances, clearly demonstrates their cynicism, their manipulative nature and total disregard for the rules of international law that govern the whole civil world “, underlines Putin’s request to the UN Security Council for a meeting on Bucha and adds:” Of course, all institutions must respond to Russia’s actions. But, unfortunately, we see that the answer that has been given so far it is insufficient. Neither the UN at the level of the Security Council, nor the OSCE, because of their decision-making procedure, when the aggressor country has to vote for such a decision, are able to take decisions proportionate to the situation in Ukraine “.

“This is why we are witnessing a serious crisis of international law and security – he remarks – I believe that the world and all international institutions must review their statutes and decision-making procedures, depriving any aggressor country of the right to vote. for Russia in connection with the war it is waging on Ukrainian territory, but also for any aggressor country in the future “.

“In the temporarily occupied territories, the judges who did not have time to leave are under severe pressure to side with the Russian authorities. The judges refuse,” he adds about possible pressure from the Russian occupation forces on the body of the judiciary.

How is Ukrainian justice handled during the war? “It depends on the territory in question. There are three types of territories. The first, where intense hostilities continue and the Russian occupation is underway, concerns cities such as Mariupol, Kherson, Zaporizhzhia, Luhansk, Donetsk oblast, as well as some cities of the Kharkiv oblast. Courts do not work in these places. Cases have been transferred to courts in other safer areas. Some judges managed to escape, others did not. We have no contact with everyone who stayed there. For example, I know. of two judges in Mariupol, but we do not know if they are alive “, replies Adnkronos Vsevolod Kniaziev.

“The second type of territories concerns those previously occupied but then freed by Ukrainian soldiers. There we will quickly restore justice and restart the work of the courts. If the buildings have been physically destroyed, we will transfer the judges to other courts. Finally there is. the third type of territory: the one where there has not been and there is no military action. There the courts function normally “. Beyond everything “since the beginning of the war, the Ukrainian courts have handed down more than 298,000 sentences”.

“Unfortunately, we already have about 40 of these buildings. Some of them were completely destroyed after the air strikes. We have both deaths and serious injuries, both among the judges and among the staff of the court,” he takes stock at Adnkronos. of the victims and damage to infrastructure in the justice system since the Russian invasion.

“Recently – he continues – there was news of the death of an employee of the Donetsk Court of Appeal in Mariupol. She died on March 13, but her death was disclosed only after the family managed to escape. from Mariupol and to call colleagues from the court. A little boy lost his mother. Last week, following an air attack, the building of the Mykolaiv Regional State Administration was destroyed; in this building was the commercial court of Mykolaiv Oblast. 37 people died, two of whom were court employees “.

“The number of judges who take up arms is constantly growing. Currently – he says – there are six in the Supreme Court. In total, more than 60 judges in the judicial system have joined the armed forces of Ukraine and the territorial defense forces. country is also protected by hundreds of court staff members. ”

Kniaziev remarks: “It is also worth noting that according to Ukrainian law, courts must operate during the war. So the first duty of a judge is to administer justice. And only in cases where the presence of a judge at the front will not prejudice or it will have minimal impact on the administration of justice by a court, that a judge can be released to the military or territorial defense. Therefore, the judiciary cannot allow many judges to fight with guns in hand. ” “After all – he comments – the scales of Themis (the goddess of justice, ed) are no less important weapons in peacetime, and especially during war”.

“I would like to thank the Italian judges and the entire Italian people for their help to Ukraine and the Ukrainians. We are currently going through one of the most difficult and painful periods since our independence, so we appreciate that Italy cares about our citizens who seek refuge in your country, which supports Ukraine with funds and actions “, he continues, adding that in Kiev” we hope for further support from your government and citizens, because after the victory in this war we still have a long way to go to reconstruction. Join this process. “

“Some of our cities – he continues – have crossed the threshold of the humanitarian catastrophe under the pressure of the enemy. We invite Italy and the entire civil world not to be indifferent, not to stay away from these sensational crimes. Our compatriots have need humanitarian aid. Our glorious and courageous army has shown strength and power to the world, but we still need weapons. Help us with this. “

“We also ask you – concludes Kniaziev – to support Ukraine’s aspirations to become part of a united Europe and a full member of the European Union. We have shown that we are part of the European family and share common values”.