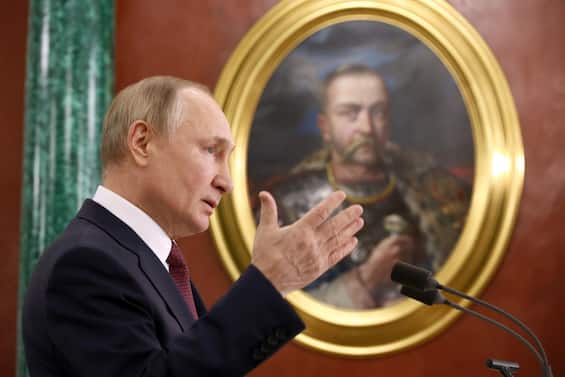 Vladimir Putin used the word “war” in public for the first time to refer to the conflict in Ukraine, instead of speaking of a “special military operation” as usual. Putin’s critics say using the word “war” to describe the Ukrainian conflict has been illegal in Russia since March, when the Russian leader signed a censorship law making it a crime to spread “false” information about the invasion, with a fine of up to to 15 years’ imprisonment for anyone convicted.

The deputy of the St. Petersburg municipality, Nikita Yuferev (who fled Russia due to his anti-war position) has asked for the opening of proceedings against the Russian president precisely because he allegedly said the word “war” during a press conference. The request – as reported by the UNIAN agency – was forwarded to the general prosecutor of the Russian Federation Igor Krasnov and to the head of the Russian Interior Ministry Vladimir Kolokoltsev. According to Yuferev – who announced his initiative in a post on Twitter – Putin’s words can “be held legally responsible for spreading falsehoods about the actions of the Russian army” and “several thousand people have already been convicted for such words on the war”. (WAR IN UKRAINE, LIVEBLOG – THE SPECIAL).

The words of the Russian president

“Our goal is not to spin the flywheel of the military conflict, but, on the contrary, to end this war,” Putin told reporters in Moscow after attending a meeting of the State Council on youth policies. “We are committed and will continue to fight for it.”