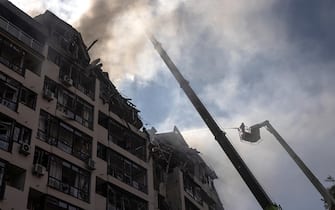 A Russian missile attack hit the Ukrainian capital at dawn Kiev. At least 14 missiles have been launched, Ukrainian MP Oleksiy Goncharenko said. One victim and several injured were reported

WATCH THE VIDEO: War in Ukraine: bombs on Kiev, withdrawn from Severodonetsk

At dawn, several explosions were heard in the district of Shevchenkivskyi. Rescuers and ambulances intervened on the spot. The missiles hit residential buildings

One person was killed in the missile attack, former Ukrainian presidential spokesman Iuliia Mendel reported on Twitter. According to Ukrinform, the Attorney General’s office also confirms the death of a civilian

War Vocabulary, the keywords of the war in Ukraine

“Following the enemy bombardments, a fire in a 9-story residential building with partial destruction of the 7th, 8th and 9th floors – reads a press release -. A fire occurred on a total area of ​​300 square meters ”

Raid from Belarus, Putin will give the Iskanders to Minsk. This is what “nuclear” missiles are

The mayor of the Ukrainian capital, Vitali Klitschko, according to the Kyiv Independent, said there are people trapped under the rubble of the nine-story building hit by one of the missiles. The area was evacuated

Meanwhile, the Ukrainian anti-aircraft has a Russian missile shot down this morning in the Kiev region, the governor of the region, Oleksiy Kuleba said, according to the Kyiv Independent

The operations of rescue in Kiev, where a Russian attack hit a residential area

Smoke in Kiev after the Russian bombing at dawn