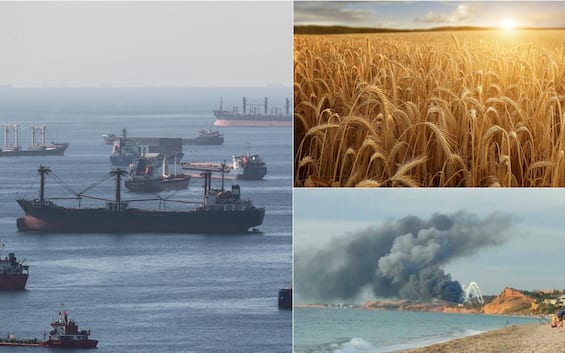 Russia has decided to re-enter the agreement on the export of wheat and other cereals that was reached on July 22 in Istanbul with the mediation of the United Nations and Turkey. This was announced by the Russian Defense Ministry. “The Russian Federation considers the guarantees received so far to be sufficient and resumes the application of the agreement”, reads an official note

Erdogan: “Priority to exports to Africa”

Turkish President Recep Tayyip Erdogan confirmed the news, announcing Russia’s return to the agreement in the Ankara parliament and stressing the priority of upcoming exports to African nations. Yesterday Erdogan, who reiterates his mediating role in the Ukrainian crisis, had a telephone conversation with Russian President Vladimir Putin. Russia’s return to the agreement, however, explained Erdogan, was possible following negotiations with Russian Defense Minister Sergei Shoigu.

“The agreement will continue as it was before”

The deal for the transition of grain-laden ships in the Black Sea “will continue as it was before” Russia’s decision to withdraw four days ago, Erdogan said, citing Shoigu. The Turkish president then said the deal would prioritize shipments to African nations, including Somalia, Djibouti and Sudan, in line with Russia’s concerns that most of the grain would reach richer nations, in especially the European ones.

UN thanks to Turkey

The United Nations, for its part, thanked Turkey for the mediation offered by Ankara with the aim of bringing Russia back into the agreement. “I welcome the return of the Russian Federation in the implementation of the Black Sea Grain Initiative to facilitate the export of food and fertilizers from Ukraine. I am grateful for Turkish assistance. I look forward to working again with all participants in the initiative “, wrote on Twitter the UN coordinator of the agreement for the export of grain from Ukrainian ports Amir Abdulla.