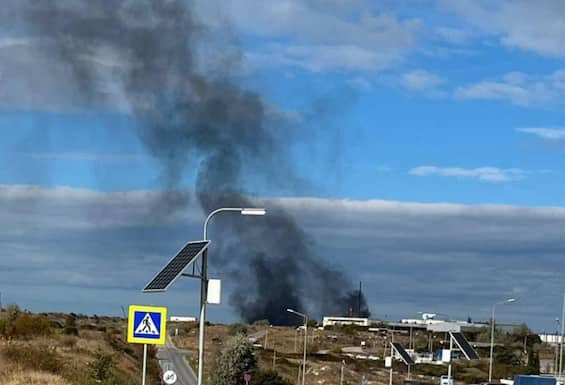 Four warships of the Black Sea Fleet of the Russian Federation, including a frigate and an amphibious assault ship, exploded in the Sevastopol Bay (LIVE UPDATES). This was stated on Telegram by Ukrainian presidential adviser Anton Gerashchenko, writing that among the damaged ships there is the Kalibr cruise missile carrier “Admiral Makarov”: a powerful explosion in the ship’s berth area was filmed and published by UNIAN. According to the Ukrainian version, the explosions recorded in the Sevastopol bay were due to Russian “negligence” and in any case caused damage to four ships in the Moscow fleet, including a frigate and a ship’s ship, reports on Twitter Anton Gerashchenko, adviser to the ministry of the Interior. Pro-Russian governor Mikhail Razvozhaev said the attack by the Ukrainian Armed Forces was the most “massive” since the start of the special military operation, reports Tass. The source of the Ukrainian ministry has posted photographs on his Twitter account in which columns of black smoke can be seen in the distance.

According to the “Southern” command of the Ukrainian armed forces, the explosions in the port of the Crimean peninsula could instead be due to the malfunction of the Russian anti-aircraft batteries. “At the moment there is no official confirmation. The reason could be errors in the launch of air defense missiles”, said spokeswoman Nataliya Humenyuk, but Moscow’s version is different: according to the Ministry of Defense, they are Ukrainian drones attacked the ships of the Black Sea fleet, an attack prepared in the Nikolayev region with the help of British military specialists and, in the raid, only one minesweeper was “slightly damaged”.

Meanwhile, the British government rejects the Russians’ accusations of London’s involvement in today’s attack on Crimea and sabotage of the Nord Stream gas pipeline. “To belittle their disastrous handling of the illegal invasion of Ukraine, the Russian Ministry of Defense is resorting to false claims of epic significance,” the London Defense Ministry said on Twitter, adding: “This fabricated story tells more about frictions within the Russian government rather than on the West “.