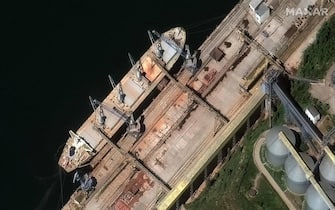 A video published by Cnn shows new satellite photos of the port of Sevastopolin the Crimea, where it appears that two Russian ships upload what it is believed to be Ukrainian wheat stolen. New images from Maxar Technologies, dated May 19 and 21, show the ships – the Matros Pozynich and the Matros Koshka – docked alongside grain silos, with grain pouring from a belt into an open hold.

According to the marine tracking site MarineTraffic.com, both ships have left the port: Matros Pozynich is sailing in the Aegean Sea, claiming to be headed for Beirut, while Matros Koshka is still in the Black Sea

War in Ukraine, grain exports blocked: the global consequences of the food crisis

The broadcaster points out that it is difficult to know for sure whether the ships were loaded with stolen Ukrainian grainbut Crimea, annexed to Russia, produces little grain, unlike the crop-rich Ukrainian regions of Kherson and Zaporizhzhia, immediately to the north

The price of wheat increases, global food crisis risk: what can happen

Ukrainian officials and industry sources reported that the Russian forces in the occupied areas cleared several silos and transported the grain south. Earlier this month, Matros Pozynich accomplished a similar mission: she loaded grain and sailed from the Black Sea to the Mediterranean. She was initially headed to Egypt with her cargo, but was turned away from Alexandria after a warning from Ukrainian officials, according to the country’s government.

He was also barred from entering Beirut and eventually docked in Latakia, Syria, where Russia has been supporting Bashar al-Assad’s regime for years. Ukrainian President Volodymyr Zelensky on several occasions accused Russia of “gradually stealing” Ukrainian food products and try to sell them

The new satellite photos could prove the looting of Ukrainian wheat by the Russians, according to CNN. Yesterday the spokesman for the Kremlin Dmitry Peskov (pictured) said that the Russia is not hindering the export of grain from Ukraine through Poland

“It is necessary unlock our seaports. We must use all diplomatic channels, because alone we cannot fight against Russia “, said Ukrainian President Volodymyr. Zelensky speaking in Davos for the World Economic Forum. “We ask to take measures for a corridor for the export of our wheat and cereals – he added -, otherwise the shortage will have effects on the world and there will be an extension of the energy crisis”