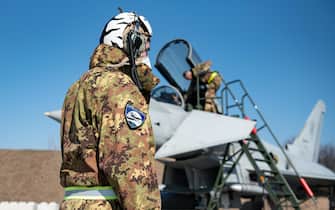 Italy send others to the East Eurofighter military aircraft and supports the defense of the Ukrainian people by sending to the legitimate authorities of Kiev protective equipment and materials such as helmets, bulletproof vests and ordnance detectors

The participation of the Italian government in the NATO operations deterrence along the conflict line to strengthen the Alliance’s east flank. The Council of Ministers has given the green light to the decree it allocates 174 million for 2022-2023 precisely to finance military maneuvers, with about 3,400 men and women in uniform mobilized

War in Ukraine, the story of the Sky TG24 correspondent

For this reason, he explained a few days ago, “Italy will strengthen its presence in Romania by doubling the number of Eurofighters already operating in the airpolicing activity. Four more planes will be sent to the Kogălniceanu base in Constanta ”

As foreseen by the rules of engagement, our military will be employed “in theNATO’s area of ​​responsibilityand there is no implicit authorization to cross the borders. “What instead can set foot on Ukrainian soil are those” non-lethal “means and materials that the decree provides for transferring” free of charge to the government authorities “of the country under attack

This is in particular “of personal protective equipment and more generally of the civilian population from the effects of the ongoing conflict “, is explained in the explanatory report of the decree, and therefore”helmets and bulletproof vests“but also” Counter-Ied materials for the detection of metal objects and explosive devices “, ie devices for” humanitarian demining in favor of the civilian population “: this is what was explained by a note from Palazzo Chigi. Material for a total allocation of 12 million euros

On the other hand, another item of expenditure is i 3 million euros earmarked for civil protection initiatives in support of the Ukrainian population. Under the European Civil Protection Mechanism will be sent 200 field tents for a total of one thousand beds

With respect to the deployment of forces, Italy, in agreement with NATO, strengthens the missions currently active in Latvia (the ‘Baltic guardian ‘), in Romania, where other planes are arriving, and in the eastern Mediterranean. The mobilization will last until 30 September 1,350 military of the ‘high readiness’ forces, which will respond to the Supreme Allied Command in Europe

In Latvia, there are 240 military framed in the ‘Baltic Guardian’, in Romania, there are 12 planes deployed and about 130 men and in the eastern Mediterranean, there are 235 personnel, two ships and an aircraft that also patrols the Black Sea. They are part of the NATO response force (Nrf), a technologically advanced multinational force composed of 40 thousand land, air, sea and quickly deployable special forces

The vanguards of the VJTF, composed of 5 thousand menthey move, in military jargon, ‘at short notice’, in the turn of 2-3 days to bring a clear message against escalation: any attempt to violate the sovereignty of a NATO nation will result in a military confrontation with all 30 countries of the Alliance

Furthermore, if NATO deems it useful in the future to deploy other deterrence forces, Italy has also increased the readiness of 2,000 reinforcement units, also useful to eventually give the change to the ‘rapid’ forces whose deployment has been arranged. With i 1,350 military of the “high-readiness” task force, they left for Eastern Europe 77 land vehicles, 2 ships (in the second half of the year) e 5 aircraft

Others two thousand men and women in uniform I am available in case of need. As well as the possibility of deploying a contingent such as the one already present in Latvia in another of the countries in the area that feel threatened by the Moscow offensive

Italy is also testing the ground with the countries on the eastern flank most exposed to the Russian threat to verify the possibility of organizing one mission similar – even numerically – to the Baltic Guardian in Latvia. The decree then allocated 11 million euros to enhance the protection of Italian offices abroad and related staff. They will also be sent 10 police reinforcements