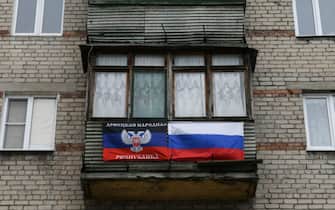 The affirmation of the independence of a state also passes by its flag. So it is for the autonomous republics of Donetsk he was born in Luganskthe two Ukrainian separatist and pro-Russian regions in the area of Donbass recognized as independent by the Russian president Vladimir Putin

WATCH THE VIDEO: Putin: “Ukraine is part of our history”

Why Putin blames Lenin for the creation of Ukraine

Black, red and blue the three main colors. Black would represent the Black Sea, red is used as the color of opportunity and blue to remember water

Russia Ukraine, what is the Nord Stream 2 gas pipeline

In the center of the flag the coat of arms of the Republic, very similar to that used by Russia, with the traditional two-headed eagle. The male figure in the middle, reports OpenDemocracywould be the representation ofArchangel Michael

What is Donbass and where is it located

According to another interpretation, endorsed by the scholar Vladimir Kornilov, author of several texts on the history of Soviet and former Soviet territories, the flag is not so much inspired by that of the Republic of Donets and Kivoj Rig, but rather by that of the International Donbass Movement (Interdvizhenye Donbasa)

It is an organization, born in August 1989, which until the end opposed the dissolution of the USSR

The blue color not the same in all flags, as seen in the photo. In some it is brighter, in others it is darker

LUGANSK – Light blue, blue and red are the basic colors of the flag of the Republic of Luganskof which there are several variants

In the center, the coat of arms with two towers to symbolize the capital city of the region

In November 2014, a new flag of the Lugansk Republic was born. The coat of arms shows a star five-pointed crown surrounded by ears of wheatheld together by a bow with the traditional colors of the region. On the lower part of the flag the name of the country: Luganskaya Narodnaya Respublika