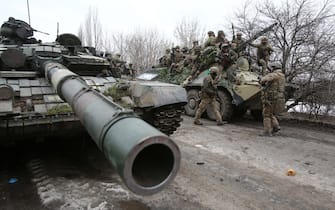 How long and in what conditions can monuments, cultural sites and historical sites survive in a country where only military targets are no longer targeted? Unesco seems to have given itself an answer: little. For this, he has mobilized to insert them under the emblem of the 1954 Hague Conventioncreated precisely to protect cultural heritage in the event of an armed conflict

The fear may not be excessive. Already in recent days, the Russian embassy to the Holy See had said that among the objectives of the Russian troops there could be the Cathedral of St. Sophia in Kiev. “Intelligence believes that the Russian military is preparing an air strike on the CathedralUnesco heritage ”, he said

Hagia Sophia, the symbol of Kiev among “the possible targets of Russian raids”

Built by the ruler Jaroslav I in 1037, it is one of the most famous places in the capital and was the first Ukrainian site to be listed as a UNESCO World Heritage Site. Six more have been added since then, including the residence of the Bucovian and Dalmatian metropolitans in Černivci (pictured)

The other World Heritage Sites in the country are the historic center complex of Lvivthe Ancient city of Chersonese Taurica and its Chora in Sevastopol, theGeodetic arch by Struve, le Tserkvas made of wood from the Carpathian region and the Ancient beech woods primordial of the Carpathians and other regions of Europe, which it shares with other states and is the only naturalistic type

For now none of these are marked in red on the Unesco site, a color that indicates a danger and which distinguishes, for example, the site of Palmira. Many of those now on this list have, however, been added to it for reasons attributable to the industrial development or at warsand now one is also fighting in Ukraine

Tour of the Yacobson Ballet in St. Petersburg suspended: “Art unites, does not divide”

The worries don’t stop there. As reported by Ansa, over the years 17 applications have been sent to include as many Ukrainian sites in the list of World Heritage Sites. Among them, there are the remains of the ancient city ​​of Tyrasan ancient trading port of the ancient world founded at the end of the sixth century BC, the astronomical observatory of Mykolayivthe whole historical center of Odessa, and the legendary “Potemkin staircase” (pictured). Today they too are watched special

On the other hand, the attacks also occurred in KharkivUnesco creative city of music, and an antenna was hit in the area of Babi Yar memorial. Both choices were condemned by UNESCO. In this climate, not even the museums they are considered safe

In recent days, ICOM, the main international non-governmental organization representing museums and their professionals, expressed “deep concern for the implications that this uncertainty will have on the safety of ICOM members, museum staff and cultural heritage in Ukraine ”

Now some speak of a “cultural catastrophe“. To avoid it, several foreign museums have already been activated. The Smithsonian, for example, has announced a new mission of its own Cultural Rescue Initiative which, following the example of what has already been done in Iraq, Haiti and Puerto Rico, has activated contacts with Ukrainian experts to secure monuments and museums. For some sites, however, it is already too late. A Museum of Local History in Ivankiv, which housed about twenty works by the painter Maria Prymachenko, was destroyed in the night between 27 and 28 February 2022

In an email to the Getty, the director of the Kiev museum, Fedir Androshchuk, said that four museums – in Vinnytsia, Zhytomyr, Sumy and Chernihiv – have managed to uninstall and protect their main exhibits: “The Vinnytsia museum is now partially used to house displaced people. There is so far no news of looting”

“We must safeguard this cultural heritage as a testimony of the past but also as a vector of peace for the future,” said Audrey Azoulay, director general of the United Nations organization for education, science and culture. “The international community has the duty to protect and preserve it for future generations. Also to protect the future, educational institutions must be considered sanctuaries ”