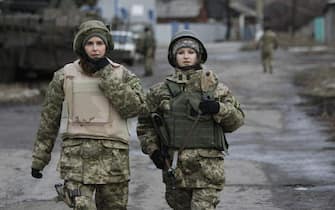 WATCH THE VIDEO: Ukraine, rows for weapons and prayers for military personnel in Lviv

The data provided by the Foreign Ministry speak of 15% of female soldiers. And on twitter the dicastery led by Dmytro Kuleba writes that “it is impossible to count the number of whom defends Ukraine in another way “. Adding thanks to all

Georgia and Moldova ask to join the EU

Because I’m not alone women enlisted in the army to resist: there is also there civilian population to join the fight against Russia

Zelensky on video in his office: it is the first time since the beginning of the war

In the photo report made by Fotogramma in western Ukraine, they can be seen girls and women who volunteer for various endurance-related tasks

Some of them are committed to sew curtains to camouflage military vehicles Ukrainians: they are at work in what were once schools and have now been converted into factories

In order to access the training you must go through the passport control: even so you try to avoid infiltration by Russian forces

Meanwhile the war continues: today we try again with the evacuation of civilians from Sumy and Irpin. Zelensky says, “We can find a compromise on Donbass and Crimea”

The latest news on the war in Ukraine. DIRECT