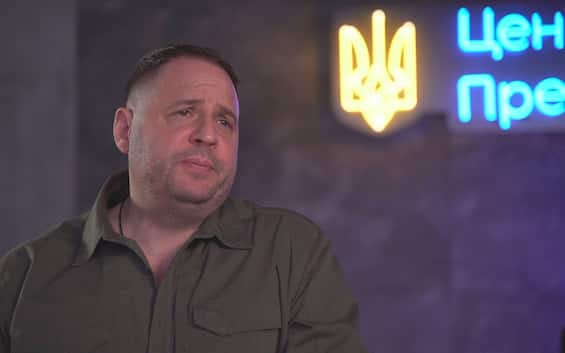 An appeal to Pope Francis to stop the destruction started by Russia and thanks to the Italian government for its support, pending the visit of Prime Minister Giorgia Meloni. These are two of the topics touched upon by the head of the Ukrainian presidential office in Kiev Andriy Yermak on Sky TG24, during the interview with Michele Cagiano. On the situation on the field he explains: “The battle of Soledar is not over yet as the Russians say. Very difficult situation, we continue to fight. We still need weapons”. And on the peace negotiations with Russia: “They are not currently underway” (WAR IN UKRAINE, LIVE UPDATES).

Let’s talk about the situation on the field. On the Donetsk front, the Russians are fighting for victory between Wagner and the Ministry of Defence. But what is really the situation in Soledar?

At the moment we have not reached the city of Donetsk yet, we will and we will liberate the whole region. We are now fighting, the battle of Soledar is not over as the Russians say and it continues, just as it continues in Bhakmut. Our soldiers, our heroes, continue to hold their ground, the situation is difficult, the fighting is bloody.

Where are we with the war today? The latest news speak of bombings also in Kiev and in the Zaporizhzhia area.

We can hear the air raid sirens even now, the situation across the country is very difficult. Russian missiles are hitting our infrastructure, there are constant attacks on the homes of our citizens. On New Year’s Eve, the Russians launched over 200 Iranian missiles and drones against Ukrainian cities, including Kiev. This is proof that the enemy wants to intimidate us, intimidate our citizens and leave us without electricity and water. Despite everything, the Ukrainians continue to fight, we will not be intimidated, the citizens after the air raids are returning to their homes. Sadly though, the war goes on without end.

NATO secretary Stoltenberg has announced that stocks of weapons to be sent to Kiev have run out but that production will restart. What weapons do you need the most today? What do you think of the international aid that has reached Ukraine?

I know that the support of the international community will increase: the United States, the United Kingdom, Poland, France and even Italy are with us, they know that the war is not over. We still need support with equipment, ammunition and tanks. Today Russia has an advantage in terms of numbers of soldiers and military equipment. I believe there will be decisive battles in the coming months, decisive for the final victory. For that, we need support.

Prime Minister Meloni said she would be ready to guarantee a peace agreement, a hypothesis immediately rejected by Moscow. Meloni also announced that he plans a trip to Kiev before the end of February. What do you think? What is your relationship with the new Italian government led by Meloni?

It is important that Italy is supporting Ukraine. It all started with former Prime Minister Draghi and we are happy to see that the new Meloni government continues to carry on this work. We have heard many pro-Ukraine statements from Meloni. We therefore thank you for what has been done and for what will be done in the coming months. We obviously look forward to Giorgia Meloni’s visit to Kiev and I think Italy could be one of the countries that will lead Ukraine to victory. I don’t care what Russia thinks about Italy’s guarantor role, I am confident that Italy will stand by us, continue to support us and help us in the implementation plan of our president’s ten point peace plan Zelensky.

An EU-Ukraine summit has been convened for 3 February. What do you expect from this meeting? What is Ukraine asking for?

As a candidate country, the relationship between Ukraine and the European Union is becoming increasingly close. And that is why we are counting on Europe’s support in such a difficult period for us. A reconstruction plan must be implemented, to ensure that our infrastructure is restored. I am sure that very soon Ukraine will be part of the European family and we will do our best to fulfill all the required pre-conditions and recommendations.

Pope Francis is also calling for peace, who a few months ago also spoke of the hypothesis of a journey to mediate between the two countries reaching both Moscow and Kiev. What do you think? Do you think it could be useful?

We appreciate all peace initiatives, including those brought forward by the Pope. I believe that Russia must stop the war, it is up to them to stop the conflict: they are killing civilians, destroying our infrastructure. I also spoke about it with Cardinal Parolin, I thank him for his involvement. I think the time has come for the Pope to visit Ukraine and thus give a very clear signal that it is Russia that must stop what it has started, by withdrawing its troops from Ukraine to stop the destruction. If so, we look forward to receiving a visit from Pope Francis, his trip would be a very important contribution to the end of the war. As for his visit to Moscow, I think it will only be useful if he returns from Moscow with some results: Russia’s decision to end the war. But it all depends on Russia.

It has been almost a year since the conflict started. You have negotiated some important issues directly with the Russians. Are peace negotiations still possible? What is the way forward?

At the moment, there are no ongoing peace negotiations, there are dialogues on prisoner exchanges and wheat, with the mediation of Turkey and the United Nations. Our terms are clear: Our vision is outlined in Zelensky’s ten-point peace plan. I know that many countries of the international community are by our side, many leaders support Ukraine and are ready to play a fundamental role in ensuring that one or several points of the plan are implemented, thus achieving peace.