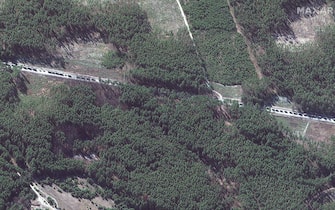 Russia’s advance in Ukraine continues with Putin’s forces heading towards Kiev: satellite images of the Maxar Technologies show a convoy of Russian military vehicles over 60 kilometers long marching to the Ukrainian capital

The convoy a Ivankiv

There military column it is made up of armored vehicles, tanks, artillery pieces and other logistics vehicles

As CNN reports, the columns of smoke also rise from buildings, perhaps houses, that seem on fire

The convoy in the area around theAntonov airport

The convoy of Russian military vehicles on the outskirts of Kiev, according to satellite images, it is over 40 miles longthat is, more than 60 kilometers

The convoy extends from Antonov Air Base north of Pribyrsk

Several officials told CNN they were concerned not only about the size of the convoy, but also about the increase in violence, of civilian casualties and indiscriminate killings in recent days. The Ukrainian capital represents a primary military target for Russia in its offensive