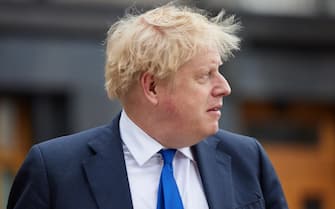 WATCH THE VIDEO: Ukraine, Johnson: we will give Kiev the weapons it needs

“The prime minister went in Ukraine to meet President Zelensky in person and show his solidarity with the Ukrainian people“a spokesman for Downing Street said, adding that the talks have focused on further “military and financial” aid offered by the UK

Johnson is the first leader of the G7 to travel to Kiev since the beginning of the Russian invasion on February 24th. On April 8th there was a visit from the president of the European Commission Ursula von der Leyen

War in Ukraine, NATO works on a standing army on the borders

Ukrainian war: who is the Russian general Dvornikov, the new commander of operations

During his stay in Kiev, Johnson tweeted that London is preparing “a new aid package financial and military “to Ukraine as evidence of its” commitment to this country in the struggle against the barbaric Russian campaign”

Ukrainian War, from sports to the trenches: athletes fighting against the Russians

For this the UK will send to Ukraine new Starstreak anti-aircraft systemsanti-ship missiles, anti-tank rockets and 120 armored vehiclesannounced Downing Street, after the meeting between Zelensky and Johnson

“Other countries need to follow suit“of London, said the Ukrainian president during the British premier’s visit to Kiev, referring to the announcement of new supplies of heavy weapons to Ukraine

After the interview, Zelensky and Johnson they walked together to the center of Kiev, accompanied by security guards. In a video published by Ukrinformthe two leaders they cross several roads and linger at talk to some locals