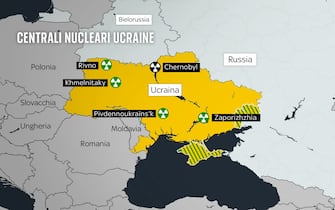 It doesn’t stop worrying about the situation Chernobylcity where the nuclear power plant and area of war in Ukraine. In exclusion zone close to the 1986 tragedy theater structure, due to the intense conditions bombing they have developed 31 fires who have swallowed more than 10,000 hectares of forest

WATCH THE VIDEO: Ukraine, the expert: the risks in Chernobyl

This was reported by the Commissioner for Human Rights of the Ukrainian Parliament, Lyudmila Denisovaon its Telegram channel, quoted by UNIAN

War in Ukraine, the risks for Chernobyl: what we know

The firesDenisova said, cause an increase in the level of radioactive air pollution: “Combustion releases radionuclides in the atmosphere, which are carried away by the wind over long distances. Radiation threatens Ukraine, Belarus and Europe “

Ukraine, new Cold War between the US and Russia: the nuclear threat

THE rescuers are currently unable to take effective measures to locate flames and eliminate them, due to the Russian control over the whole area

US atomic bombs in Italy: how many and where they are

The mayor of SlavutychYuriy Fomichev, has launched an appeal to the International Atomic Energy Agency (Aiea) to send firefighting experts and equipment to Ukraine as soon as possible

And the IAEA has expressed it worry also for the workers of the Chernobyl nuclear power plant, after i Russian military they took the nearby town of Slavutych, where many of the plant’s employees live

In particular, in a press release quoted by Guardianthe director of the IAEA Rafael Mariano Grossi (in the picture) he said he was concerned about workers being able to disconnect, respect the shifts and go home to Slavutych to rest

After a first rotation on March 20 and 21, the nuclear power plant managed to rotate the again on March 27 Ukrainian personnel held hostage by the occupiers, said the mayor of Slavutych on TV, quoted by Ukrainian Pravda

“We found volunteersthey are true heroes. this is a conscious decision of the people: to go to work at the Chernobyl nuclear power plant, realizing it could take a long time to be replaced – explained Mayor Fomichev – This is not a real restoration of the labor system and replacement of personnel, but they are in progress negotiations for a rotation more frequently”

in the meantime Ukraine is working for oust the Russia by the International Atomic Energy Agency for “nuclear terrorism”following the occupation of Ukrainian nuclear power plants of Chernobyl and Zaporizhzhia (in the picture). He brings it back The Kyiv Independent citing the Kiev Ministry of Energy