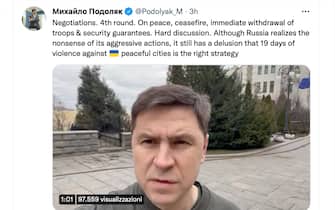 The fourth round of talks between Kiev and Moscow kicked off on the morning of Monday 14 March. The main Kiev negotiator and presidential adviser, Mykhailo Podolyak, posted a photo on Twitter of the videoconference talks with the Russian delegation and defined the negotiations how “difficult“, stating that the two sides are outlining their” specific positions ”

From what emerged, Kiev asks Moscow, in the negotiations resumed this morning via videoconference, the ceasefire and withdrawal of Russian troops. Podolyak, one of the negotiators and adviser to Ukrainian President Volodymyr Zelensky, reported in a video on Twitter

The parties remain in the ongoing talks between the delegations of Ukraine and Russia firm on “their specific positions. Communication continues to be difficult. The reason for the disagreement is that there are too different political systems, ”Podolyak said. The deal, however, adds in another Twitter post, “it goes on”

War in Ukraine, China-US summit in Rome: what could happen

The deputy head of President Zelensky’s office, Ihor Zhovkvasaid he believes Moscow’s position is more constructive than it was previously. “Instead of giving us an ultimatum or red lines or asking Ukraine to capitulate, they now appear to be starting constructive negotiations,” he told Radio 4’s Today, according to BBC reports.

Ramzan Kadyrov, the Chechen leader is in Ukraine: “Give up or we will finish you”

In the past few hours, Ukrainian President Volodymyr Zelensky has pledged to continue talks with Russia and, in a new video, says that Ukraine’s delegation for negotiations has a “clear task” to do what it can to secure a meeting with Vladimir Putin. Zelensky has been asking for a meeting with his Russian counterpart for some time, but so far his request has not been heard by the Kremlin

A member of the Russian delegationLeonid Slutsky, yesterday reported that “significant progress“they have been made in the negotiations with the Ukrainian delegation since the beginning of the talks.” I expect the progress to turn into a common position of both delegations and a document to be signed, “he said.

War in Ukraine, the flight continues: Poland and Moldova are at the limit. PHOTO

Among the main issues addressed is the future “neutrality” of Ukraine. Perhaps the point on which a convergence could be recorded more easily, given the concessions already made at least verbally by Zelensky

Meanwhile, there are 10 i humanitarian corridors negotiations between Kiev and Moscow which should open today: 7 in the Kiev region and 3 in the Luhansk region. The Kyiv Independent reports. While no corridors are planned for the besieged city of Mariupol. Ukrainian authorities have been trying for days to get a humanitarian convoy to the city