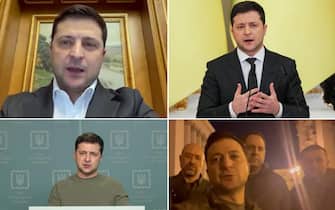 For over 6 weeks the whole world has been wondering where exactly it is Volodymyr Zelensky. At the beginning of the conflict, the Russian media insinuated that he may have fled abroad with his family but the former comedian-turned-president walked out on the street swearing that would remain in Ukraine “until death” (in the photos the images of Zelensky in the first days of conflict)

WATCH THE VIDEO: Ukraine, Zelensky: Russian invaders have nothing human

Now the Ukrainian press reveals where he works most of the time, although he returns to his office from time to time mainly for streaming links with the West. The Ukrainian leader has chosen a secret bunker in Kiev as a safe havenbuilt in Soviet times and designed to withstand a nuclear war

Ukraine: the story of Volodymyr Zelensky, the former comedian who became president. PHOTO

From the Zelensky bunker decides and coordinates military operations as well as humanitarian and relief interventions – as well as launching his now famous j’accusazioni to the rest of the world – together with a team of military, diplomats and economists

Who is Olena Zelenska, wife of the Ukrainian president

The bunker is not known exactly where it is but it is likely to be located near the presidential palaces in Kiev (pictured). Those who have been to this refuge in the past, such as former Ukrainian Prime Minister Mykola Azarov, say it “is a fully protected bunker, prepared in Soviet times for the political and military leadership of the state against a nuclear attack. Not even the direct impact of nuclear munitions can affect the people in the shelter”

Zelensky’s speeches to governments, from Churchill to 9/11: all quotes

Zelensky and his team, explains Pravda Ukraina, they use the rooms of the presidential palace for meetings, interviews, briefings and some meetings. But the main work takes place on the premises of the bunker

Russia, where Putin is: the hypotheses, between shelters and secret bunkers

The deputy head of the presidential office works closely with the president Kyrylo Tymoshenko and the Minister of Infrastructure Oleksandr Kubrakov, jokingly referred to as “shadow prime ministers”. In the first days of the war Tymoshenko was not in Kiev, but then he returned and gained space alongside the president by participating in talks in Istanbul as part of the Ukrainian delegation. Kubrakov, on the other hand, is responsible for the logistics of delivering aid and restoring strategic infrastructure

War in Ukraine, Zelensky plays the audio of anti-aircraft sirens

Those responsible for foreign policy activities are the head of the president’s office, Andriy Yermak, which has contacts with the White House; the Foreign Minister Dmytro Kuleba (pictured), which negotiates with governments; the Deputy Head of the Bureau Andriy Sibigawhich prepares the diplomatic framework for the president and the authors of his speeches before the important talks

Even if, the Ukrainian media clarify, most of the diplomatic work is done by Zelensky himself who maintains contacts with international leaders, meets partners in Kiev, communicates with journalists and gives interviews, including to the Russian media (in the photo, his connection with the UN Security Council)

The Minister of Defense Oleksiy Reznikov (pictured), the Secretary of the Security and Defense Council Oleksiy Danilov, the commander-in-chief of the armed forces Valery Zaluzhnyas well as numerous military commanders are responsible for the defense sphere. David Arakhamia, Party leader of President Servant of the People is one of the main negotiators with Russia