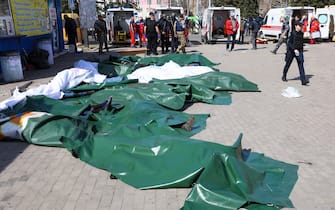 Rockets hit one railway station in Kramatorskin eastern Ukraine, causing casualties between civilians. At least 39 peopleamong which also four childrenwere killed and another 100 wounds in the bombing of the station in the Donetsk region

In that station thousands of refugees (4,000 according to the town’s mayor) waited for be evacuated from the cities under siege and the areas where it is concentrated the Russian military offensive

War in Ukraine, Finland and Sweden towards NATO membership

The station was closed and the fleeing population will be evacuated in the next few hours from Slovyansk, with convoys bound for Lviv, Chernivtsi, Ternopil and Odessa

War in Ukraine, how the Russians try to hide their means and why they talk about it

THE Ukrainian media report that on one of the missiles that hit the station area (pictured) would be read there written in Russian “for children”. It has been impossible so far determine who wrote the sentence on the rocket

“The hospitals they cannot cope with the number of people injured in the Russian attack on the station, “said the mayor of the city Oleksander Honcharenko. The regional governor Pavlo Kyrylenko said that many of the injured are in serious condition, Reuters reports

“THE inhumane Russians they do not abandon their methods. Not having the strength and courage to stand up to us on the battlefield, they are cynically destroying the civilian population. This is an evil that has no limits. And if he is not punished, it will never stop“, said the Ukrainian president Volodymyr Zelensky

The missile attack of the Russians at the Kramatorsk railway station was preceded by an in-depth survey of the lens, he says Oleksiy Arestovychadviser to the head of the Office of the President of Ukraine

“Russian troops hit Kramatorsk station with a Iskander missile. It should be understood that such attacks are preceded by careful reconnaissance of targets, at least UAVs (drones). They saw very well that they were there early in the morning thousands of people who were trying to evacuate from the station at that time, families, children, the elderly“Arestovych stressed

The Moscow Ministry of Defense has denied that the Russian army bombed Kramatorsk station talking about “provocation” of the Ukrainians. “The fragments of the missile that appear in a video” near the Kramatorsk station “belong to a Tochka-U vector, used only by Ukrainian forces“, Moscow reported

But the commissioner for human rights of the Ukrainian Parliament Lyudmyla Denisova claims that they were used on the station Russian high-precision Iskander missiles. “The Russian criminal army used a cluster missile high precision ‘Iskander’, “he says