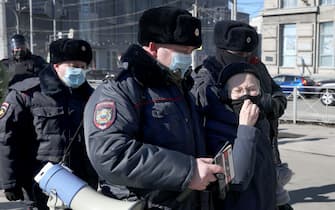 In Russia the anti-war demonstrations and in favor of Ukraine. Various people returned to make their voices heard in the squares of various cities, from Moscow to St. Petersburg. However, the country’s law enforcement agencies immediately intervened

WATCH THE VIDEO: Ukraine-Russia War, the map of the attacks

In Moscow alone, there are at least 300 people already arrested “for unauthorized events”. Across Russia, on another Sunday marked by anti-war protests, there are also nine reporters stopped. In total, in the country, they are over 800 the protesters arrested, according to the OVD-Info website, specifying that 817 citizens they were taken away by the police in 37 cities

According to the Avtovaz Live platform, cited by Moscow Time, journalists were stopped during the demonstrations in St.Pietroburgo

War in Ukraine, what are the effects of sanctions on Russia

Tensions and arrests also in other cities of Russia where anti-war protests are underway. “At least 268 people have already been arrested in 23 cities “, OVD-Info, an NGO specialized in monitoring demonstrations, reported in the morning on its website

AFP journalists attended the detention of several demonstrators in Moscow and St. Petersburg, the second largest city in the country. From the images you can see the policemen intervening by force against the citizens in the square

Also according to the independent website OVD-Info, from 24 February I’m 14,274 people arrested in Russia during protests against aggression against Ukraine

The organization, which deals with the protection of human rights in Russia, has specified that there are 10 courts engaged in political criminal proceedings in the week starting March 14

Meanwhile in Ukraine about 1 million people they are without gas and heating, due to the Russian attacks. The bombings damaged the infrastructure of Donetsk, Luhansk and Mykolaiv. Engineers were prevented from reaching a gas distribution center in Bashtanka due to ongoing fighting

A protester taken away by the police

A protester taken away by the police