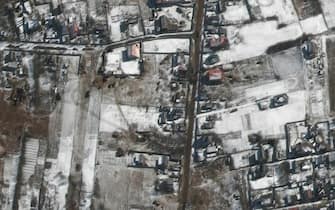 The great is no longer compact convoyabout 60 kilometerswhich in recent days was slowly heading towards Kiev, the capital of Ukraine. This is evidenced by new satellite images released by the private company Maxar Technologies

According to reports from the BBC, the images show that the convoy is “largely missing And redistributed“in the surroundings of the capital, suggesting that one may soon be triggered new offensive against Kiev

There American defense recorded a further approach of the Army to Kiev, of about 5 kilometers

The images, explains Reuters, show unit battleships presumably belonging to the convoy maneuver in the surrounding citiesnear Antonov airport and in some areas around Kiev

Russia, anti-war protesters use emojis and symbols to avoid arrests

TO Berestyankawest of Kiev, supply trucks and what appear to be multiple rocket batteries have been reported (pictured: fires in the Hostomel area)

What are chemical weapons: how they work and how many types exist

Artillery in firing position they appear deployed near Lubyanka (in the photo: people and cars queuing outside Irpin)

TO Stoyanka the houses in the suburbs are destroyed and burned

In the photo, fires at the southern end of theAntonov airport and in the fuel storage area, a Hostomel

Satellite images show the before and after of a bombing to Chernihiv. In the photo, the center commercial Epicentr K near the residential buildings is completely destroyed