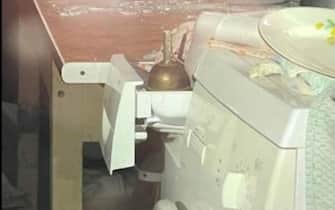 The Ukrainian Interior Ministry stated that i Russian soldiers they planted mines in all “places where they spent the night”. In those places, which were later abandoned, bombs were found on the entrance doors, between the sofas and beds and even in the washing machinesin the compartment where the detergent is usually placed

It is not the first time that Ukraine has made similar accusations against Russia. Just a few days ago, President Volodymyr Zelensky said the “invaders” were leaving north of the country, in some cases on their own initiative, and in other cases because they had been “kicked out”. Then he had added: “They are undermining all this territory. The houses are being mined, the equipment and even the corpses”

As it relates Scmpthe governor of Chernihiv Viacheslav Chaus also spoke of the presence of these explosives, saying that the Russians have deliberately left when they withdrew from the regional capital. “There are many mines. The villages are full.” Just to indicate the presence of these devices, signs have appeared like the one seen in this photo, taken at Borodyanka

War in Ukraine, horror in Borodyanka: “Two hundred bodies under the rubble”

In support of the allegations made in Moscow, the Ukrainian Interior Ministry has released photos that actually show mines inside the houseshidden in drawers and shopping bags

Weapons Born in Ukraine, howitzers from the USA and MIG-29 jets from Slovakia arrive in Kiev

Also parks they are not considered safe areas. As this image shows, mines have also been placed on trees

A mine discovered in a park near a tree marked with the letter Z, which has become a symbol of the Russian invasion

Many of the images released by the Ukrainian Ministry of the Interior show bombs that could hardly be mistaken for anything else, but the danger also comes from objects which apparently seem harmless

This is the case of the so-called “butterfly mines“, green in color and with wavy shapes, no larger than 10 centimeters. They explode when collected – often after being mistaken for something else – and, according to what we learn, the Russians use them a lot

The Ukrainian army has also sounded the alarm about other types of camouflaged bombs. “They may seem like a toya cell phone, a ballpoint pen – any object can be filled with explosives, “they said

To worry are also the “smart” mines, so called because they are equipped with a seismic sensor that recognizes steps and knows how to distinguish between humans and animals. Unlike other devices of this type, they do not explode when a person walks on or touches them, but rather when they get close. The Ukrainian army reported finding them near the city of Kharkiv

The use of these mines, also known as ‘POM-3’ or ‘Medallion’, has also been denounced by Human Rights Watch. The NGO accused Russia of using them because, among other things, Kiev has neither these devices nor the release systems. As reported by the New York Timesare extremely dangerous because they are capable of hitting and kill people within 15 meters