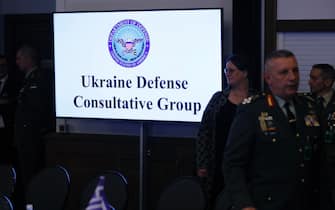 “The urgency of the situation is known to all. And we can do more. Today we are gathered here, over 40 countries, to help Ukraine win the battle against Russia. Today we are launching a mechanism to work together, to help Ukraine now and after the war “. With these words, the head of the Pentagon Lloyd Austin opened the extraordinary summit in the US military base in Ramstein, Germany, where the defense ministers of dozens of countries met, including the Ukrainian one Oleksiy Reznikov

“Ukraine has done an extraordinary job of defending itself from Russian aggression and the battle for Kiev will go down in the history books. But now the situation on the ground has changed, with the offensive in the south and in the Donbass and we need to understand what Ukraine needs to fight, “Austin said.

“There is a sense of urgency that we all understand, we will do what we can, including the mobilization of our industrial base – added Austin – Ukraine believes it can win the war, and we all believe in this too, it needs our help. today, and will also need it in the future ”

“We are here thanks to the courage of the Ukrainians. Your resistance inspires the free world,” said the US defense secretary. “The war unleashed by Vladimir Putin is unjustifiable, as are the atrocities committed by Russian forces. It is an imperial conflict, wanted by one man only to satisfy his ambitions. It is an affront to free peoples. Ukraine, on the other hand, fights. to defend their sovereignty “. “And it goes more than Ukraine, it goes to Europe – Austin said – The invasion is evil, unjust and has no legal justification”

Ukraine, the victims of the conflict who have become a symbol

At the summit, German Defense Minister Christine Lambrecht confirmed that Berlin will send Gepard panzers (also known as Cheetahs) to Ukraine, marking an important turning point in Germany’s policy that has hitherto always been based on prudence.

Putin, former councilor Illarionov: after Ukraine “could aim for Moldova and Georgia”

“We work together with our American friends in the training of Ukrainian troops in artillery systems on German soil,” Lambrecht also announced, according to the Dpa, which publishes the text of the speech. “We all know that in this conflict the artillery is an essential factor ”