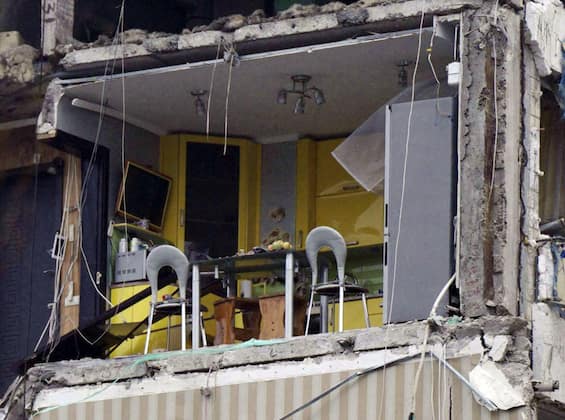 A blonde girl blows out the candles on her birthday cake, to the smiles of relatives and friends. She then she receives the embrace of other children and those present, in a party that seems like many in the world. The background is a yellow kitchen, the same as in a brutal photograph that shows it hanging over the precipice, after the missile that fell on Dnipro, in the Ukraine, gutted the other part of the building. On the table, still fruit, to tell how time has stopped after the raid that killed at least 44 people in the eastern Ukrainian city. The yellow kitchen, viral on social media, thus becomes a symbol of the horror of war, of that everyday life broken by a rain of death that knows no bounds. It is not clear when the video of the girl’s birthday dates back to, but according to reports from some Ukrainian information channels on social networks, the family protagonist of the video would be that of the Ukrainian boxing coach Mykhailo Korenovsky, who was killed in the bombing, whose funeral held today.

His wife and two young daughters survived because they were walking down the street at the time of the attack, writes Ukrainska Pravda. “Yesterday, instead of this hole, there was my apartment, where my family and I lived for nine years,” the coach’s wife Olga Korenovska wrote on Instagram, sharing an image of the gutted building in Dnipro. “A tragically famous yellow kitchen,” writes Ukrainian Deputy Foreign Minister Andrij Melnyk, among the users who shared the photograph of the yellow kitchen and the birthday video. “Mykhailo Korenovsky, a prominent boxing trainer, was assassinated in his cozy apartment (…) We will take revenge, damned Russia”.