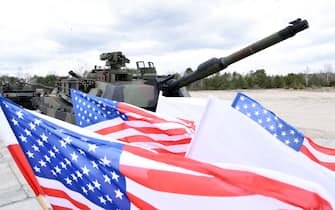 The United States they seem intent on sending several Abrams tanks to help theUkraine in the war against Russia. The brings it back Wall Street Journal, citing US military sources. The official announcement could come next week. However, White House spokeswoman Karine Jean-Pierre said she “has nothing to anticipate, but we are always in constant contact with Ukraine” regarding possible statements about sending the Abrams.

Washington’s decision, part of a broader agreement with the Germanywould go to resolve the disagreements that emerged last week during the summit a Ramsteinwhen Berlin said it was against sending German Leopard 2 tanks to Kiev. Now, he writes Der Spiegeltogether with the delivery of the American Abrams, Germany too would have made the decision to send “at least one company” of Leopard

Name yourself MBT extension (Main battle tank), the Abrams took the field during the first Gulf Warin Afghanistan and in Iraq. They are among the most powerful US armored vehicles, capable of resisting – it is said – even ad nuclear, biological and chemical attacks. In their first version they were produced in 1978, by Chrysler Defense (now General Dynamics Land Systems). They are named after General Creighton Abrams, who led American troops in the Vietnam War from 1968 to 1972

War in Ukraine, the Russians stole thousands of works of art. PHOTO

The Abrams entered service in 1980. Five years later the production of the M1A1which was followed by that of the last generation, the M1A2. It is still not entirely clear which version the Pentagon will decide to send to Kiev. The Abrams of the second production round, the M1A1s, weigh 62 tons. They are equipped with direct jet engines and are equipped with a 120mm cannon. They reach a speed of 70 km per hour

Lavrov: “The war between Russia and the West is no longer hybrid but real”

Leopard, how the German super tanks requested by Ukraine work

Another strong point of the Abrams is their level of mobility And agility in land operations. They allow soldiers to count on practically immediate cover operations, without having to wait for the use of planes for the consequent bombings required from the ground on areas and targets deemed to be at risk

at the moment theus army has approx 4,400 Abrams, while the Navy has 400 of them. The United States has produced a version of the tanks for export, currently used in Egypt, Kuwait, Saudi Arabia, Australia and Iraq

Iraqi forces have deployed tanks to fight theIsis. The Saudis have instead used them in the civil war in Yemen

Last April, the Poland signed a $4.7 billion deal with the United States to purchase 250 Abrams tankswhich will be delivered between 2025 and 2026

In early January, Warsaw signed a according to agreement – of 1.4 billion dollars – to receive more Abrams, in addition to those already envisaged