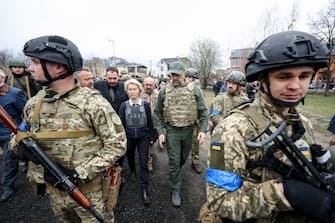 Updates on the Russia-Ukraine war. LIVE

“Here – said von der Leyen – the unthinkable has happened. We have seen the cruel face of Putin’s army, the recklessness and ruthlessness of those who occupied the city. Here in Bucha we have seen humanity shattered. The whole world is with Bucha today “.

Bucha massacre in Ukraine, the mayor: so far 320 dead have been found

The president of the European Commission arrived in Bucha after being in Kiev. In the Ukrainian city that was the scene of the massacre of civilians, von der Leyen said: “The EU civil advisory mission will support the Ukrainian Attorney General, providing training and donating equipment, to ensure safe investigations and gathering evidence on the ground”.

Earlier in the day, the president of the European Commission posted a tweet about the Kramatorsk attack. “This morning’s missile attack on a railway station used for the evacuation of civilians in Ukraine is despicable,” she wrote. “I am shocked by the loss of life and I will personally extend my condolences to President Zelensky. My thoughts go out to the families of the victims.”

“Today I can announce that the EU is back, literally: the head of our delegation is on the road to Kiev, now we will be able to work even more directly and more closely together”. Thus the High Representative for European Foreign Policy Josep Borrell at the press point during the mission to Ukraine together with the President of the EU Commission Ursula von der Leyen.

War in Ukraine, the story of a soldier on Sky TG24

Ursula von der Leyen traveled to Ukraine to express her “unshakable support” for the country in the fight against the Russian invasion. “The Ukrainian people deserve our solidarity”, she declared yesterday during a press conference in Stockholm.

The President of the European Commission visited the city’s mass graves in the Kiev region and, together with Ukrainian Prime Minister Denys Shmyhal, paid tribute to the victims of the massacre of civilians. “We cry together with the people of Bucha”, she said alongside the EU High Representative for Foreign Affairs Josep Borrell.